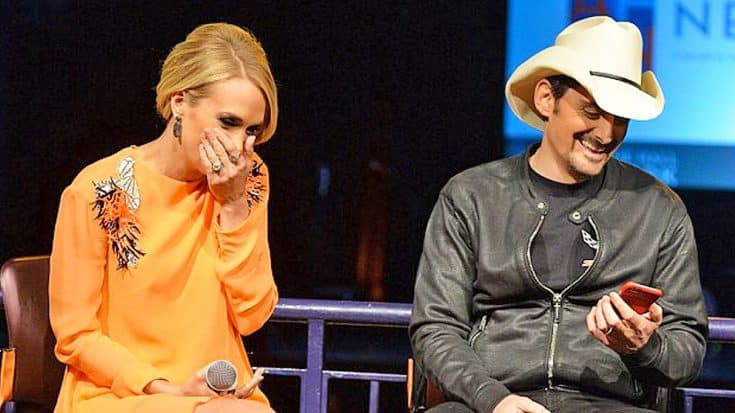 During 2015 CMA Awards interview with Pittsburgh radio station WOGI, Underwood was asked what life has been like on the road with a new baby. That has to be quite the adjustment! She shared details about baby-proofing the bus for little Isaiah’s safety.

“All the doors and drawers have magnetic locks so he doesn’t fall down the trash chute”. Underwood shared.

“That would be very Star Wars,” Paisley chimed in. “You could even make the walls [close in].”

Underwood was also asked if she would ever let Paisley babysit, to which she quickly answered,

“Probably not. Because he thinks it’s okay that the baby goes down the trash chute”.

Can you blame her?

The duo shared the stage at the 49th Annual CMA Awards for the eighth year in a road. They seem to get more and more creative every year, with hilarious parodies, and thoughtful jabs at fellow country stars.

Both Underwood and Paisley have been extremely busy on the road this year. Underwood is getting ready to launch her tour for her album Storyteller, the first since Isaiah’s birth in February 2015. She also appeared on the Sinatra 100: An All-Star Grammy Concert, and is gearing up to headline New Year’s Rockin’ Eve to ring in 2016.

Paisley is performing at college campuses all across the U.S. as a part of his Country Nation College tour. The winter leg of his Crushin’ It tour is slated to kick off January 21, 2016. Many fans anxiously awaiting those tour dates! So fortunately for Underwood, he’ll be too busy for babysitting!

Underwood and Paisley are always joking around, and surprising one another. You just never know what to expect from this dynamic duo! Watch Paisley surprise Underwood during a performance of “Remind Me” below.