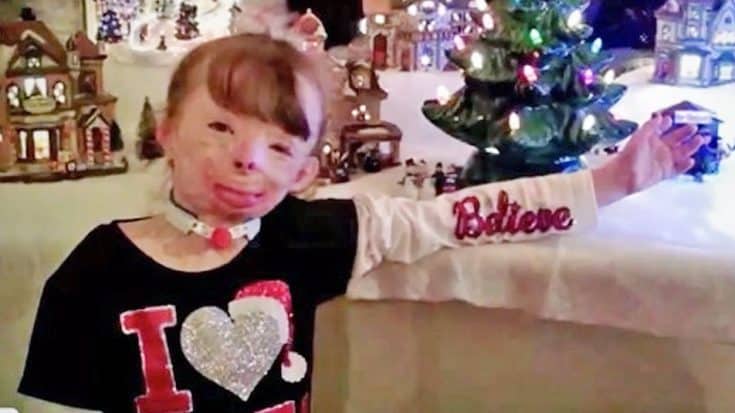 During December, many kids work on their wish lists for Santa, hoping to find a stack of new toys under the tree on Christmas morning.

But for 8-year-old Safyre Terry, her Christmas wish is to fill her Christmas card tree, and you can help make her wish come true.

Over the course of her short life, Safyre has already experienced so much pain and loss. One morning in May 2013, an arsonist set fire to Safyre’s family home, and the fire claimed the lives of her younger sister Layah, and her younger brothers Michael and Donovan.

Safyre’s father David also died in the fire, but not before doing all he could to protect Safyre from the blaze. Her aunt and legal guardian Liz Dolder said the firefighters told her how David had saved Safyre’s life:

“The firefighters found her father, and when they tried to lift him up, she was underneath him — cuddled into his arms. That is the reason why she lived.”

Although Safrye survived, she was severely burned from the fire, and lost the skin on her face, as well as her entire left foot and right hand. In just two years’ time, Safrye has had to undergo a total of over 65 surgeries.

Despite everything she’s been through, Safrye’s aunt says that she has always maintained a positive attitude.

In preperation for Christmas, Liz went and bought Safyre a Christmas card tree, and says that Safyre told her she couldn’t wait to fill the tree up, but Liz doubted that would be possible.

However, after Liz posted a photo of Safyre standing by her card tree, people started sending in their cards. Since then, an Imgur campaign has been launched calling for people to send in their cards to Safyre, and Liz says the response has been incredible.

“It’s so overwhelming,” Liz says. “I’m crying buckets, because when you’ve seen the ugly in the world, and then you see the world come together for her, it’s just more than words can say. I’m so moved.”

Safrye is just as excited about all the Christmas cards she’s receiving, which is evident in another set of photos Liz shared on Facebook.

Can someone say GLOWING…Safyre got mail today.

If you want to help make Safrye’s Christmas wish come true, you can mail your cards to the following address:

We think it’s safe to say that Safrye will soon have enough cards to fill more than just one tree!