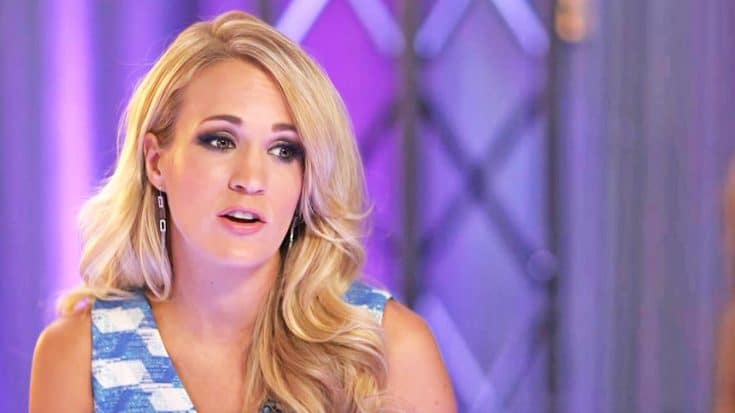 Even through the incredible success of her single “Smoke Break”, some fans are offended by it…

Released in August 2015 alongside the announcement of her fifth studio album, Storyteller, Carrie Underwood‘s chart-topping single now finds itself amid a swirling controversy.

The single itself peaked at the No. 2 position on the US Country Airplay chart and has received an incredible amount of positive reviews from music critics.

Even one reviewer acclaimed, “Among all the great music we’ve been treated to this summer, no song has carried more significance than Carrie Underwood’s excellent new single, ‘Smoke Break’.”

Although a swarming amount of critics find joy in the track, there are many who don’t. At face value, some people are claiming that Underwood’s single is actually promoting smoking with the chorus “She said, I don’t smoke/But sometimes I need a long drag/Yeah, I know it might sound bad/But sometimes I need a smoke break”.

With the clash of fans on opposing sides, Underwood opens up about the topic in a recent interview.

“I honestly think people look really hard to be offended about everything these days. I think the people, if they were offended, probably aren’t my fans anyway. I don’t even think they’ve listened to the song…”

While the track gained a significant amount of popularity, it was selling far less than tracks by other artists that promote other vices.

“I also feel that there’s a lot of guys out there that sing about smoking other things…”, She continued.

As with Underwood, many critics have stood to defend the song. Dee Lockett of Vulture took a stand against the critics claiming it was promoting tobacco and lung cancer.

“Like many of Carrie’s narrative-driven songs, though, she’s making a larger point. A “stiff drink” and a “long drag” are just placeholders for any vice the overworked might depend on to survive.”, Lockett writes.

Controversial lyrics or not, no one can deny that the song has a growing number of fans and itself has proved a success for the country star.

Watch the full interview & music video below and let us know what y’all think in the comments!