By Jennifer Pernicano on December 9, 2015
Advertisement 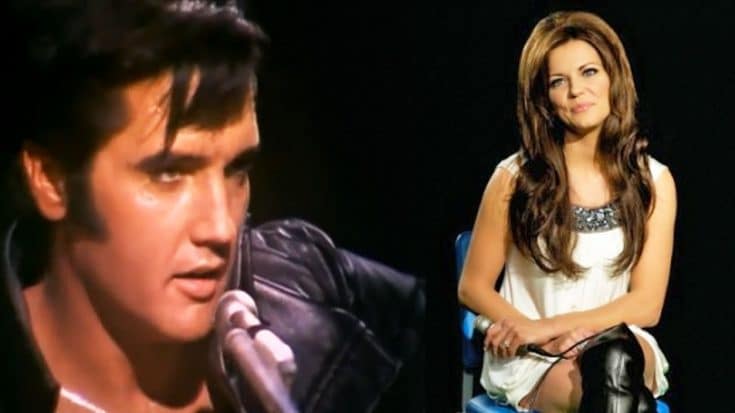 With the help of a little technology, Martina McBride was able to share a duet with the man, the myth, the legend, Elvis Presley.

Using footage from Presley’s 1968 Comeback Special, some tech-savvy producers were able to recreate the magic moment Presley sang “Blue Christmas,“ with McBride sitting next to him.

♫ I Got A Woman – Elvis Presley – The Complete '68 Comeback Special- The 40th Anniversary Edition [CD4] pic.twitter.com/BSL6tXFTZ1

It might sound confusing, but really it is one of the most convincing inserts you’ll ever see. Especially when McBride dresses the part. With bouffant hair, false lashes, and a miniskirt she could almost pass for a young Priscilla Presley.

Presley wasn’t the first to record “Blue Christmas,” but he is certainly the most noteworthy. He recorded the holiday classic for his 1957 Christmas album and sealed its fate as a rock Christmas standard. In 2008, RCA Records put together an album of Elvis Presley Christmas Duets, which featured McBride on “Blue Christmas“ with The King of Rock n’ Roll.

Below is a behind the scenes look at how they inserted McBride into the original 1968 video, and the finished product. Pretty impressive!

Enjoy, and have a very Merry Christmas!