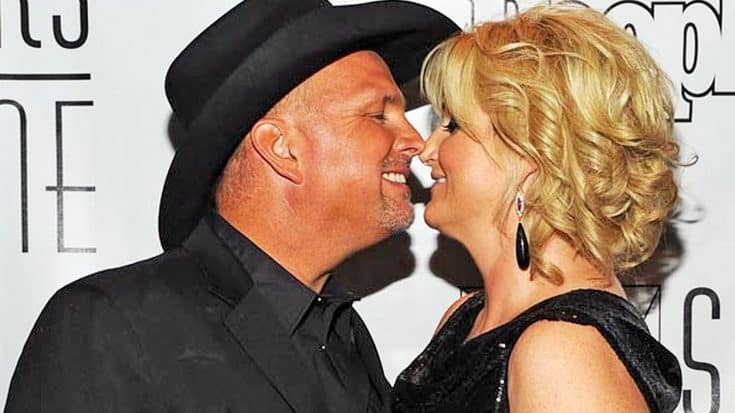 On December 10, 2005, Garth Brooks and Trisha Yearwood were married, and instantly become one of country music’s power couples.

Now, ten years later, Garth and Trisha are still one of the most talked about couples in country music, especially since embarking on a world tour together in September 2014.

During many of their interviews over the years, Garth and Trisha have been more than happy to gush about one another, which goes to show just how strong their love is.

“I’m definitely the happiest I’ve ever been in my life,” Trisha said in an interview with ET.

When asked how the couple planned on celebrating their anniversary, Garth said it would be totally up to Yearwood.

“Whatever she wants to do, that’s what we’re going to do,” he said.”If I’m any kind of husband I’ll have some surprises up my sleeve — hopefully ones she likes.”

Garth has always done well at surprising Trisha in the past, something you’ll get to see in this collection of three of their most romantic moments throughout the years.

Garth Surprises Trisha With A Special Guest On Her Birthday

Trisha wasn’t touring with Garth yet on her birthday in 2014, but she was in the audience for his show in Atlanta, Georgia.

During the show, Garth brings Trisha up on stage and gets the entire audience to sing “Happy Birthday” before surprising her with a four-tiered cake topped with a tiara.

You can tell that Trisha is very surprised, but Garth has an even better surprise waiting for her backstage. Suddenly, Kelly Clarkson walks out on stage with a piece of birthday cake in her hand for Trisha! Trisha can’t contain her excitement as she embraces her good friend and “PrizeFighter” duet partner.

We’d say when it came to Trisha’s birthday in 2014, Garth did a great job at surprising her!

Garth And Trisha Sing “If Only I Could Win Your Love”

In 2014, Garth and Trisha performed their cover of the Emmylou Harris classic “If Only I Could Win Your Love” at the Cannery Ballroom in Nashville, Tennessee. At the beginning of the performance, Trisha says something to Garth that he apparently finds hysterical, and he can’t control his laughter.

Finally, after figuring out that Trisha should start singing first, the two of them pull it together to deliver a stunning and romantic duet of the song.

The two of them stare into each other’s eyes almost the entire time, and Garth can’t seem to wipe the smile off of his face.

This is definitely a duet that is both too cute, and too funny for words!

Garth Has A Texas-Size Birthday Surprise For Trisha

Once again, Garth had another surprise in store for Trisha’s birthday, this time during one of their World Tour concerts in Texas in 2015.

The cake and tiara theme from 2014 carried over, with Garth once again placing a tiara on Trisha’s head after he leads the huge Texas crowd in singing “Happy Birthday.”

Garth also surprises Trisha with a big bouquet of flowers, which she holds in her arms as Garth and the crowd sing to her.

While placing the tiara on Trisha’s head, Garth thanks Trisha for being there, referencing his song “Friends In Low Places” in the process.

“I just want to tell you how much I love you and how much I thank you for spending your birthday with probably the best friends in low places that you will have,” he said.

After Trisha thanked the audience, she pulled Garth in for an affectionate kiss, much to the delight of the crowd.

My birthday…bigger and better in Texas! Thank you for a wonderful night! xoxo trisha #gbtyontour

Who can’t wait to see what kind of surprise Garth has in store for him and Trisha’s anniversary this year?

We wish Garth and Trisha many more years of happiness together!