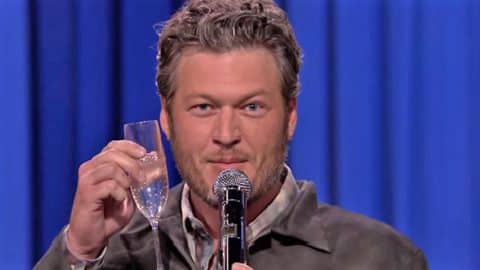 Blake Shelton takes his job on “The Voice” very seriously. He has won four times, and has a good chance at winning for the fifth time this season.

RaeLynn, who was on Team Blake for Season Two of ‘The Voice’, and Shelton struck up a fast friendship. He has continued to mentor her in the years following her appearance on the singing competition show, and they have even collaborated a few times.

The two singers have remained so close that Shelton is throwing RaeLynn and her new fiancé, Josh Davis, an engagement party!

RaeLynn walked the red carpet at the CMT Artists of the Year event, where Shelton was being honored, and spoke about the upcoming engagement party.

“We’re so excited about it, we’re going to have a blast,” RaeLynn told People. “He’s just so involved and an amazing person to look up to.”

When asked if there is a theme, RaeLynn took no time to respond.

“We’re trying to figure it out,” she says. “I really want it to be ugly sweater-themed!”

Can you imagine Blake Shelton in an ugly Christmas sweater?! We can’t wait to see pictures!

Watch her interview below.