By Miranda Raye on December 14, 2015
Advertisement 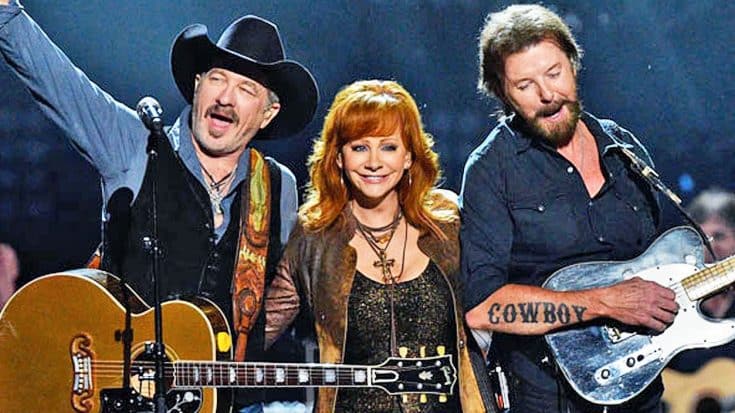 Following one of their shows in Las Vegas this weekend, Reba McEntire and Brooks & Dunn were surprised by a major Hollywood star who stopped by for a visit.

Their guest was none other than Johnny Depp, who made a trip to Vegas along with his wife Amber Heard to catch the show.

Ronnie Dunn‘s wife, Janine, and Reba had the chance to catch up with Johnny backstage, posing for a photo together which Reba later shared on her Instagram.

“Loved getting to visit with Johnny Depp and his group last night after our show at Caesars. What a nice man!!!!” Reba captioned the photo.

@janinedunn and I loved getting to visit with Johnny Depp and his group last night after our show at Caesars. What a nice man!!!!#chocolat #findingneverland

It turns out that Johnny has a connection to Brooks & Dunn that many don’t realize. His wife, Amber, was in Brooks & Dunn’s music video for their 2003 single, “Red Dirt Road.”

Ronnie also shared a picture of him with Johnny, smiling wide as he gestures toward him. We’d say he was pleasantly surprised that Johnny stopped by!

It's a small world !! @JohnnyDepp dropped by the dressing room last night after the @Caesars show with wife Amber. She was in our RED DIRT ROAD video ! ?: @dustin_haney

What a big surprise for Reba and Brooks & Dunn!

We wonder if any other big stars will stop by to surprise Reba and Brooks & Dunn at their other Vegas shows?