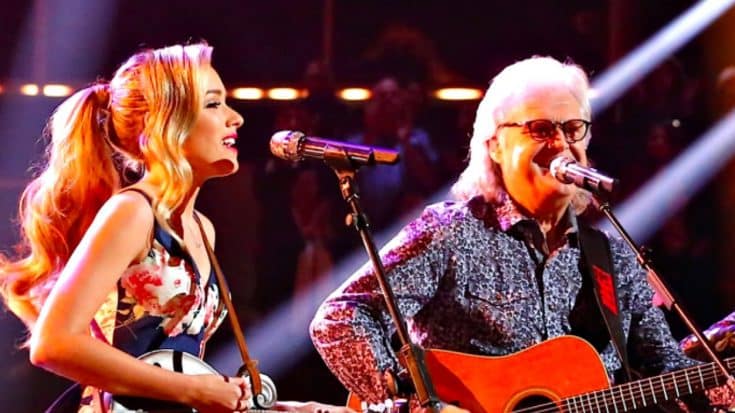 Emily Ann Roberts’ dream came true when she was joined by legendary bluegrass singer Ricky Skaggs for a rousing rendition of his 1985 hit, ‘Country Boy’ during tonight’s Season 9 ‘The Voice’ finale. Roberts, 17, is this season’s youngest finalist and the only female vying for this year’s title. Early this season, Roberts said that if she could sing a duet with anyone it would be Ricky Skaggs. The bluegrass legend responded by being a vocal supporter Roberts throughout the season.

During last night’s episode, the Team Blake member performed Elvis’ ‘Blue Christmas’, Cam’s breakout country hit ‘Burning House’, and was joined by coach Blake Shelton for a cover of Kenny Rogers’ and Dolly Parton’s chart topping song ‘Islands In The Stream.’ But, tonight’s performance with Ricky Skaggs showcased Roberts’ talent in a way that we hadn’t seen all season.

‘Country Boy’ was a number one hit for Skaggs in 1985, the same year that the bluegrass giant was named CMA Entertainer of the Year. The video for the song featured legend Bill Monroe and was nominated for the first CMA Music Video of the Year award, but was ultimately beat out by Hank Williams Jr.’s ‘All My Rowdy Friends Are Coming Over Tonight.’

Watch Emily Ann Roberts and Ricky Skaggs’ collaboration below and let us know what you think!