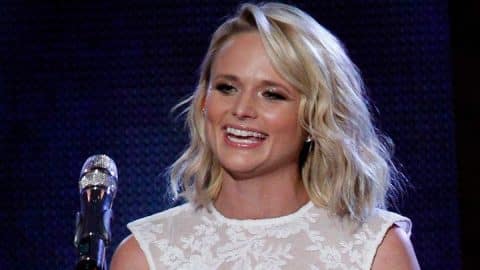 Miranda Lambert has officially moved on after her summer divorce. Speculation had been swirling around Lambert for the last week as the star was rumored to be dating Nashville-based musician Anderson East, whose real name is Michael Cameron Anderson. In a photo posted to Instagram late Friday (Jan. 1), Lambert confirmed her relationship with 27-year old Anderson.

In the photo, a smiling Anderson is seen with his arm around Lambert as the two cuddle under a blanket. The photo caption reads, “The snuggle is real…@andersoneast @raytair @ape_lewis.”

This is the first public relationship for Miranda Lambert since the end of her four-year marriage to Blake Shelton in July. The 32-year old told Cosmopolitan recently that she’s “still processing everything and figuring out where to go and what happened.” The star also shared her feelings on a new relationship.

“If I ever were to get married again – which is completely not on my radar at all right now – I feel like it’s not about it being a step in life,” she explained. “It’s not about a piece of paper or a diamond. It’s the way you feel about somebody and the commitment in your heart.”

Congratulations to Miranda Lambert on her new relationship! We wish her and Anderson the very best!