Joey Feek Is ‘Seeing The Light’ 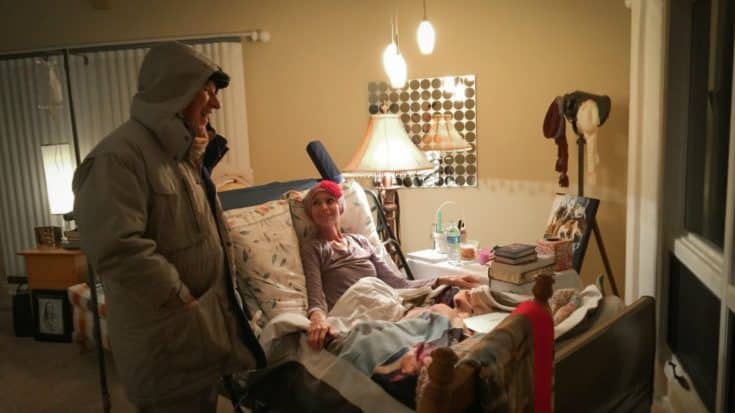 While most of us were ringing in the New Year with resolutions and plans, Joey and Rory Feek were just thankful for another day. In a new blog post, Rory Feek confessed that the holiday season was tough for his wife, Joey.

“The holidays have been a roller-coaster for my bride.  She’s had some good days, some bad days – some wonderful moments, and some deep pain that the morphine just couldn’t seem to touch.  How could it… it wasn’t that kind of pain.

They say that at Christmas time emotions run high, and you feel more than you do the rest of the year.  I think that’s probably true.  Though she managed a smile most of the time, Joey’s heart was heavy and she was feeling some things she hadn’t before…

A sadness. A fear of the unknown. And even some anger – not at God, just at her situation I suppose. It’s not easy for her to be as excited about what the new year holds in store as it was last year.”

But, despite the new emotions, Joey has “seen the light,” as Rory says. He goes on to share a story of gospel music legends, Bill and Gloria Gaither.

The Gaithers were both teachers in Joey’s hometown of Alexandria, Indiana, long before they created a gospel music empire. Chances are good that you’ve seen one of the Gaither’s Homecoming videos on your cable television station or have sung one of their songs at church on Sunday mornings. When the Gaither’s aren’t on the road, Bill visits Joey faithfully, sitting by her bed and sharing jokes and stories.

Rory tells of a night, just before Christmas, that they noticed a large fire burning outside of Joey’s window. Bill Gaither had built a bonfire with hopes that Joey could see it. Rory uses Bill Gaither’s bonfire as a metaphor for the light that has been shined upon the Feek’s by their family and friends around the world who have showed their support during Joey’s cancer battle.

“They have something that shines so bright inside them, others can’t help but notice it in their eyes and on their faces and in their actions.  They use their lives to provide some light in a dark world that can be overwhelming and scary at times.”

We continue to pray for a miracle for Joey and Rory! To read Rory’s full blog post, click here.