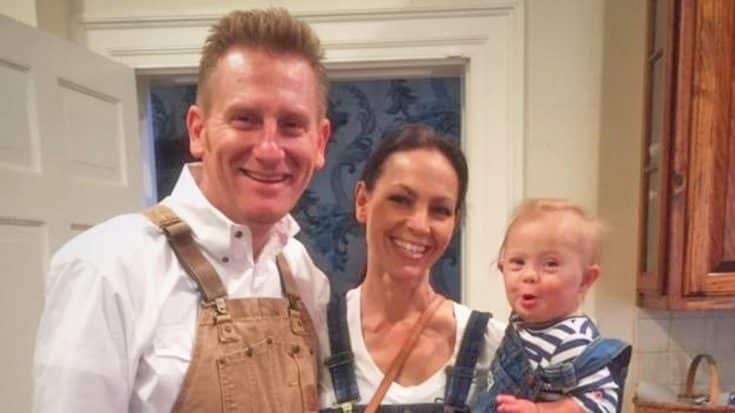 One would never know that Joey Feek didn’t want to be a mother. “It’s not that she didn’t like kids, she just never saw herself having any,” her husband wrote just one month before the birth of their daughter, Indiana. But, recent candid photos shared by her husband, Rory, show a woman in the final stages of her Stage IV cancer battle totally in love with her almost-2-year old daughter, Indiana.

“When Joey and I got married in 2002, she made it very clear that she was never going to be having a baby.  She had never wanted to be a mama, never liked holding babies or had any kind of yearning to be a mom.”

While Joey never developed a desire to have a baby, she did desire to trust God with her fears, Rory shared. “So one day about a year and a half ago, she gave it to Him, and said ‘if you want us to have a baby Lord, I want what you want’.  And that was it.  She went off birth control and almost a year went by and though she’d have her moment’s of wanting to ‘take it back’ from God, she remained faithful and trusting. This past June, on Father’s Day to be exact, she and we found out she was pregnant.”

Eleven years after Joey and Rory married and a few months into Joey’s pregnancy, she fell in love with the idea of being a mom. And, in February of 2014, Indiana Boon Feek was born “at home at 12:03 pm with the assistance of a midwife and the birth experience was perfect.  She was delivered breech, naturally, with no medical assistance,” Rory Feek wrote at the time.

Indiana’s birth story is a testament to the strength and determination of Joey Feek. And, it doesn’t surprise any of us that Joey is fighting her cancer battle with every ounce of strength she has. Just weeks after Rory posted a photo of what was supposed to be his wife’s last dance, Joey walked again.“I guess the power-of-the-will is much stronger than the power of fear.  Honestly, I think Joey just got tired of listening to life going on in the rooms outside of her bedroom and tired of wondering what it would be like to be part of it,” Rory shared.

Joey had been in her hospice bed for weeks and was prepared to never walk again, but made up her mind to seize every moment with her family. In a series of photos posted to Facebook during the holidays, Joey can be seen playing with and reading to Indy despite her rough days.

…Indy reading a book to her Mama this morning.

…loving watching them loving each other.

Joey has made it clear that her goal is to live to see her daughter turn two in February, and we have no doubt that it will happen. The child that she never saw herself having, is the very thing that has given her reason to live.

Showered with love from Hickory Films on Vimeo.