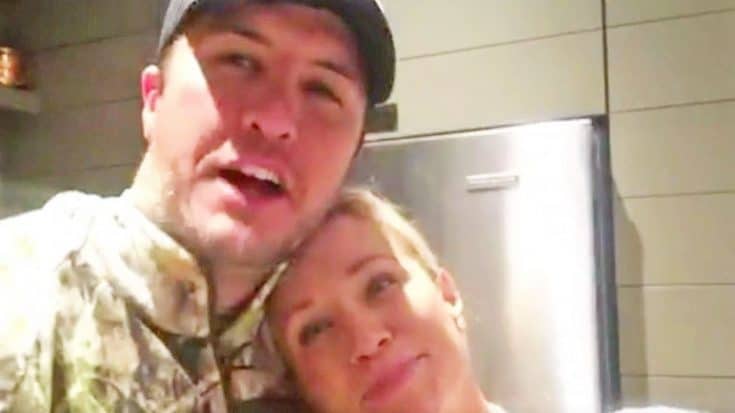 Luke Bryan had an eventful holiday season this year, and he’s sharing some of the highlights with his fans through a personal video.

Bryan put together a video of his Thanksgiving and Christmas celebrations with his app, and later shared it to his Facebook page for all of his fans to see.

Thanksgiving was extra special for Bryan this year, since he was selected to perform during halftime of the football game between the Dallas Cowboys and Carolina Panthers. Bryan showed his fans what him and his crew were doing behind the scenes, which was basically just eating and having a good time.

Bryan also filled his fans in on what he’d be performing during halftime. “We’re gonna do six and a half minutes of some of my classics,” he said with a big grin on his face. “My booty-shakin’ classics.”

Even though Bryan was away from home on Thanksgiving, he had the chance to spend his Christmas at home with his family. On Christmas, Bryan took his fans on a tour through the house, pointing out the new barn he built that was featured in his “Strip It Down” music video.

Bryan also introduced his fans to all his family members, including his sons, his mom, and his “pa-in-law,” who was a bit confused as to what Bryan was filming. But once Bryan explained it to him, pa-in-law greeted his fans, saying “Well hello and Merry Christmas!”

Another family member who made an appearance in the video was none other than Bryan’s beautiful wife, Caroline, who had the honors of unveiling the Christmas turkey for dinner.

It seems like Bryan and his family had an enjoyable holiday season this year! You can watch the video of their celebrations below.

We wish Bryan and his family lots of happiness in this New Year!

Glad we got to share the holidays with y'all on the app. Download it now for even more exciting stuff in 2016.http://m.onelink.me/b5b16bf8