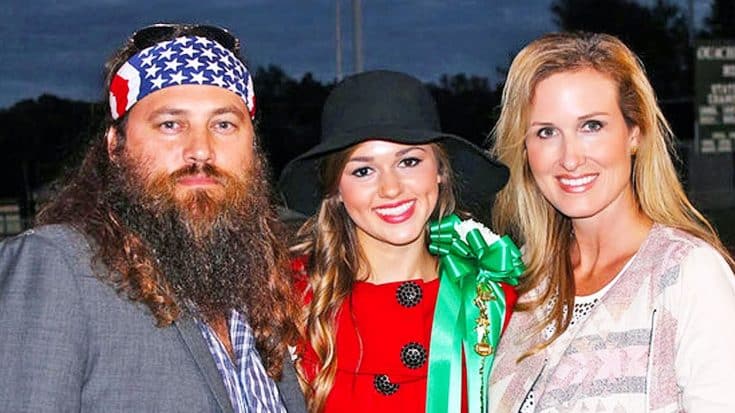 The Robertson Family via eonline

Anyone who is a fan of Duck Dynasty knows that the Robertsons are one big, crazy family, and Sadie‘s recent text conversation with her parents, Willie and Korie proves it.

Willie and Korie have known each other since elementary school, and were married on January 11, 1992 when Korie was 18 and Willie was 19.

Since then they have had three children together, John Luke, Sadie, and Bella, have adopted a son, Will, and have a foster daughter, Rebecca. As the couple recently announced, they are also in the process of adopting a 13-year-old boy, whose name they have not released.

In honor of her parents’ 24th anniversary, Sadie shared a hilarious text message conversation with them to her Instagram. Sadie wishes her parents a happy anniversary, telling them that she loves and misses them.

Willie’s response is absolute gold, “Hey kids, (ones who are not in trouble and lost their phones) ur mom is the most amazing woman in the world,” he writes. “It took me 24 years to realize that. Ha.”

Even though some of the Robertson kids were grounded, they still had an enjoyable day celebrating their parents’ anniversary. Korie posted a photo of the family looking all dressed up for some celebratory photos, and Korie was even wearing her wedding dress!

Actually I made everyone dress up with us ??#happyanniversarybaby #24years

Korie also shared a photo of just her and Willie, along with a photo from their wedding day. Even after all these years, the two of them are still deeply in love. It looks like the only thing that’s changed is that Willie now sports his signature beard!

24 years by this man's side! Looking forward to many, many more!! (Yes, I did put on my wedding dress and make Willie dress up to get this pic ??)

What a good-looking pair! After being together for so long, how well do Willie and Korie know each other? Well you can find out in the video below when the two of them play “He Said, She Said.”

Happy Anniversary Willie and Korie! Wishing you both many more years of happiness together!