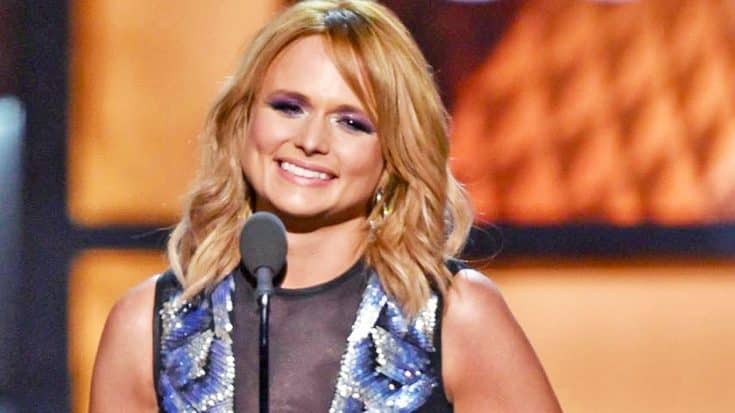 Ever since Miranda Lambert confirmed her new relationship with Nashville-based rhythm and blues/pop singer Anderson East, she’s remained fairly quiet about her new sweetheart. But in a recent post to her Instagram, Lambert finally broke that silence.

Lambert wanted to show some love for East’s home state of Alabama prior to the NCAA football championship game between Alabama and Clemson, and chose to do so through an adorable video.

The video, with “Sweet Home Alabama” playing in the background, shows two baby pigs an Alabama uniform and cheerleading outfit. At first, it looks like the pigs might engage in a showdown of their own, but it turns out they simply enjoy munching on the grass while a group of cows stand by and watch.

Lambert kept her caption short and slightly flirty, quoting lyrics to her band Pistol Annies‘ song “Boys from the South”, “‘Somethin’ bout a boy from the south’… #Bama,” she wrote.

We’re sure that Lambert and East were happy to hear that Alabama won the game, making it their fourth national championship title.

Lambert has been enjoying a little downtime recently since the conclusion of her Roadside Bars & Pink Guitars Tour. But she definitely has a busy 2016 in store, recently being named as one of the performers at the iHeart Country Fest. In addition, Lambert will also go on a stadium tour with Kenny Chesney this summer.

We wonder if the Pistol Annies will make a surprise guest appearance at any of Lambert’s concerts this year like they have in the past? You can listen to their song, “Boys from the South” that inspired Lambert’s caption on her Instagram post in the clip below.