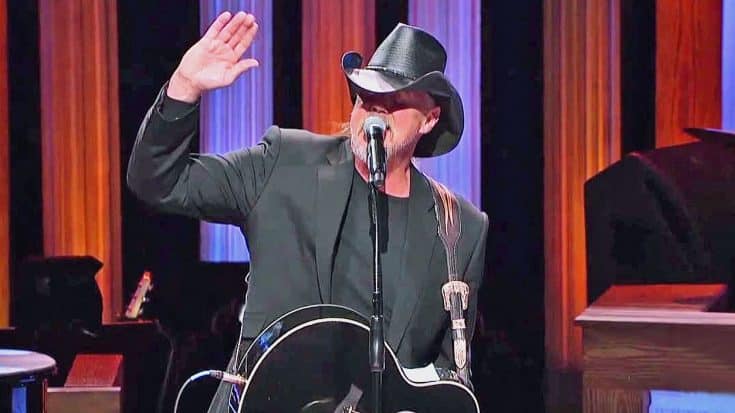 Three years after his last album, Love Will…, was released, Trace Adkins is preparing to stun country fans with another incredible record later this year. While the title and release date of Adkins’ upcoming album have not been revealed, fans are already familiar with its lead single “Jesus and Jones.”

Written by the talented songwriting team of Tyler Farr, Jim McCormick, and Casey Beathard, “Jesus and Jones” was released to radio on January 19, 2016. Since its release, the track has climbed to the 41st spot on the Billboard charts.

Although Adkins didn’t write the song, he feels that its message applies to his own life. The song discusses the inner battle a person experiences between their good and bad sides. While they know they should turn toward the good, or “Jesus” side of their life, they are constantly tempted to turn toward the bad, or the “Jones” side instead.

For Adkins, he felt the song accurately portrayed the own “war” he’s experienced since childhood over whether he should be more like Jesus or Jones. He opened up further about his personal connection to the song during an interview in 2015:

“I’ve always been in that place. I started out singing gospel music and then found myself singing George Jones songs in a beer joint. So you have this kind of struggle there internally between those two things. Sometimes I’m a good boy, sometimes I’m not.”

While celebrating the Grand Ole Opry’s 90th Anniversary during an appearance on October 3, 2015, Adkins decided to debut his new single to the crowd. He explained the story behind it before he started singing, with his deep, baritone voice bellowing out the notes with a great sense of power.

Adkins’ Opry performance is a captivating one to watch. The song’s story-like structure and Adkins’ personal connection to it draw you in from the start. Once he sings the first note, prepare to go on a wild ride between “Jesus and Jones.”

Tune in below to watch Adkins perform his intriguing new single at the Opry!