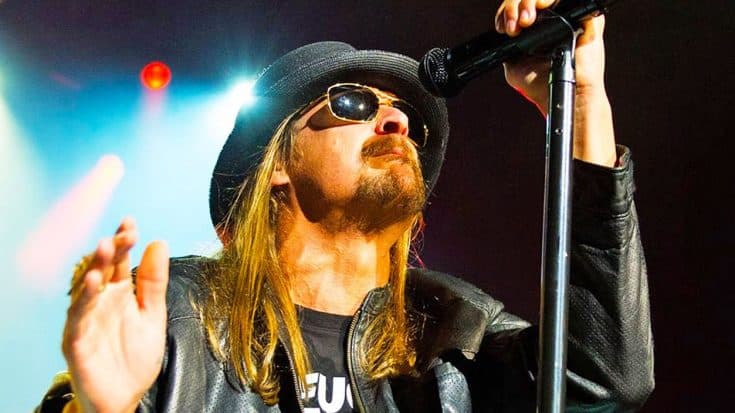 Over the course of his career, Kid Rock has experimented with a variety of music genres, including country, rock, rap, and hip hop. No matter what genre he tries, success follows, and he was even named as the number one selling male solo artist of the 2000s.

Born on January 17, 1971 in Romeo, Michigan, Robert James “Bob” Ritchie found small town life boring, and started practicing rap music to keep himself entertained. Years later, the small town boy would take on the stage name Kid Rock, and would put his rap skills to use to launch a musical career.

Rock started off his career as a rapper and a hip hop artist, and started to experience major commercial success in 1998. Three years later, he made the transition to a more rock, country, and blues sound, which was a smart career move, since his popularity continued to rise.

In total, Rock has been nominated for five Grammy’s and has won countless other awards at the AMA‘s and Billboard Music Awards. Half of his ten albums have been certified Multi-Platinum or Platinum by the RIAA, with one other album being certified Gold.

Rock’s ability to transition between multiple genres is surely what has helped contribute to his consistent popularity. In honor of his 45th birthday, we’ve gathered up some of our favorite songs of his.

Co-written by Rock and pop/rock/country artist Sheryl Crow, “Picture” was released in 2002 as a single off of Rock’s album, Cocky. The song was originally recorded with Crow, but Rock’s label was unable to get permission from Crow’s label to release the original recording as a single.

Due to the conflict, country singer Allison Moorer recorded Crow’s parts of the song, and she was the one featured on the official single. Despite this, many radio stations chose to play the original version of the song with Crow, while some country stations stuck with the edited version featuring Moorer.

Although Crow’s label never did approve the release of the song with her vocals, she was featured in Rock’s music video for the song instead of Moorer.

Released on October 29, 2010 as the lead single off of Rock’s album of the same title, “Born Free” experienced chart success both in the US and abroad.

A little over a year after its release, “Born Free” gained more attention when presidential candidate Mitt Romney announced his plans to use it as his campaign theme song. Rock performed the song at several rallies and political events for Romney, including ones in Michigan, Colorado, and New Hampshire.

The music video for the song was filmed in the Upper Peninsula of Rock’s home state of Michigan, and shows him driving through the landscape, “Fast, on a rough road riding/High, through the mountains climbing/twisting, turning further from my home.”

Overall, Rock’s 2008 single “All Summer Long” is the biggest hit of his career. Released as the third single from his album Rock n Roll Jesus, the song is a mashup with two popular songs from the 1970’s, Lynyrd Skynyrd‘s “Sweet Home Alabama,” and Warren Zevon’s “Werewolves of London.”

Overseas, the song was a number one hit in multiple countries, including Australia, Austria, Germany, Switzerland, Ireland, and the UK.

In 2009, “All Summer Long” earned Rock a Grammy nomination for Best Male Pop Vocal Performance.  Although Rock did not win the Grammy, he took home several other awards for the song, including a Detroit Music Award, a CMT Music Award, and a People’s Choice Award.

To this date, “All Summer Long” remains as Rock’s most awarded and recognizable song.

Rock has never been afraid to experiment with different types of music, and his uncanny ability to blend genres is the main factor that has led to his success. The continued popularity of his music around the world goes to show that he’s clearly doing something right.