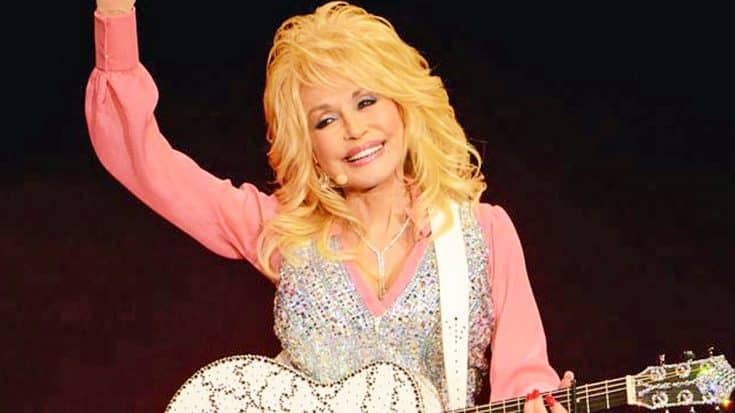 On January 19, 1946, Dolly Rebecca Parton was born in Sevier County, Tennessee. The fourth of 12 children, Dolly and her family lived in poverty, with all of them crammed together in a one-room cabin north of the Smokey Mountains.

Dolly had a passion for music at a young age, and started singing in church when she was only six. Her faith was an important part of her upbringing, and is something she still treasures today. As she once said, “I grew up in a very religious background. I trust God, I love God, and I love the thoughts of it.”

By the time Dolly turned 13, she had made her Grand Ole Opry debut, and at age 18 she moved to Nashville to pursue a career in country music.

From that point onward, Dolly took the music industry by storm, and today she is the most honored female country artist of all time. She has a total of 25 RIAA Gold, Platinum, and Multi-Platinum albums, as well as 25 number one hit singles. In addition, Dolly has been awarded eight Grammy’s, ten CMA Awards, and three AMA’s.

Beyond her work as a singer, Dolly is also a songwriter, penning over 3,000 songs over the course of her career so far. She is also an actress, starring in films such as 9 to 5, The Best Little Whorehouse In Texas, and Steel Magnolias.

Even after all these years, Dolly has never forgotten where she came from, giving back a large portion of her earnings to her home state of Tennessee. She is currently co-owner of the Dollywood Company, which runs the theme park Dollywood in Pigeon Forge and also supports the Dolly Parton Imagination Library, whose mission is to help increase child literacy.

The impact that Dolly has made on the world through both her music and her life is evident in so many respects. In honor of her 70th birthday, we’d like to pay tribute to country’s golden girl with three of her unforgettable songs.

“Coat of Many Colors”

Written by Dolly herself, “Coat of Many Colors” was released in 1971 as the second single off of her album of the same title.  The song ended up peaking at the fourth spot on the Billboard Hot Country Singles chart, and made its way into the Top 20 on the Canadian charts.

The song is a personal one for Dolly, since it tells the story of her childhood and something special her mother did for her. When Dolly was young, her mother made her a coat out of brightly colored rags, and told Dolly and the other children the story of Joseph in the Bible and how he had a Coat of Many Colors.

Dolly absolutely adored the coat her mother made for her, because she knew how much love she put into it. To this date, she still has her Coat of Many Colors, which is now on display in a museum in Dollywood.

Released in 1973 as the title track of her album of the same name “Jolene” is not only considered one of Dolly’s greatest songs, but one of the greatest songs in history. In 2004, Rolling Stone selected “Jolene” as the 217th greatest song of all time on its 500 Greatest Songs of All Time list.

In a 2008 interview with NPR, Dolly says that “Jolene” has been covered by other artists more than any other song she’s ever written. She says that there’s just something about the song that makes it a favorite of so many people.

“It’s a great chord progression — people love that ‘Jolene’ lick,” she says. “It’s as much a part of the song almost as the song. And because it’s just the same word over and over, even a first-grader or a baby can sing, ‘Jolene, Jolene, Jolene, Jolene.’ It’s like, how hard can that be?“

The song’s lyrics tell the story of a woman who begs the beautiful Jolene not to take her man away from her. Dolly says the character of Jolene was inspired by a real-life person, a bank teller who used to flirt with her husband, Carl Dean.

But Dolly says that the real-life “Jolene” never did take her husband away from her, and that the song “really [is] an innocent song all around, but sounds like a dreadful one.”

Today, the tale of “Jolene” still captivates audiences around the world, with the song re-appearing on the charts following Dolly’s performance of it at the Glastonbury Festival of Contemporary Performing Arts in 2014.

“I Will Always Love You”

Released in 1974, “I Will Always Love You” was another single featured on Dolly’s album, Jolene. The song was a number one country hit, not just once, but twice, when a 1982 recording of the song for the soundtrack to The Best Little Whorehouse In Texas claimed the top spot on the charts. This accomplishment made Dolly the first artist to earn a number one hit with the same song.

Dolly wrote “I Will Always Love You” in 1973 for her mentor and business partner Porter Wagoner after she decided it was time for her to go out on her own. The songs lyrics speak of a breakup, but the narrator states that she will always love her former flame, saying, “I wish you joy and happiness/But above all this I wish you love.“

Although “I Will Always Love You” is one of Dolly’s biggest hits, many people don’t know that she was the one who wrote and originally recorded the song. That’s because in 1992, R&B singer Whitney Houston released her cover of the song, which snagged the top spot on the charts in 19 countries.

While speaking with Bart Herbison of the Nashville Songwriters Association International, Dolly recalled how she felt the first time she ever heard Whitney sing her song.

“The first time that I heard Whitney’s version of [the song), I just about wrecked my car,” she said. “I’ll never, ever, ever forget that. My heart almost just popped. It was such an overwhelming feeling to hear it done so great, with such a great and huge production, and with her voice. That was amazing.“

There’s no denying that Whitney’s version of “I Always Love You” is incredible, but we will always have a special place in our hearts for Dolly’s original version.

At age 70, Dolly shows no signs of slowing down any time soon, and we’re glad. Dolly has never understood why people make a big deal out of growing old. She says that no matter her age, she feels young on the inside, and that’s what keeps her going.

“I want to go and go, and then drop dead in the middle of something I’m loving to do,” she says. “And if that doesn’t happen, if I wind up sitting in a wheelchair, at least I’ll have my high heels on.”

We will always love you Dolly! Wishing you many more years of happiness and success!