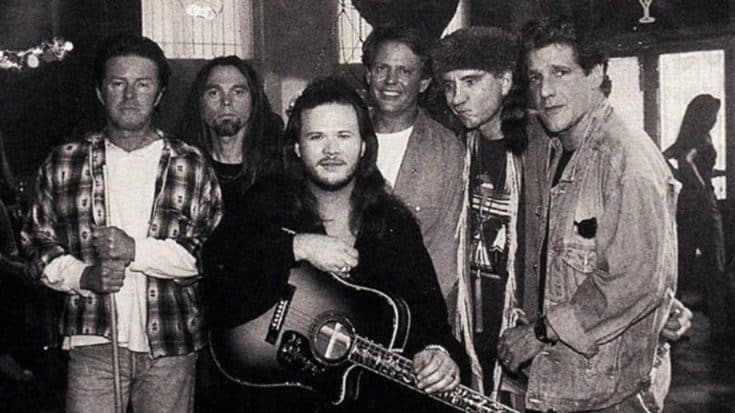 The death of Eagles lead singer and guitarist Glenn Frey shook the music community yesterday (Jan. 19). Frey’s musical influence wasn’t limited to the boundaries of genres as can be proved by the response from the country music industry after the news of his death spread. Stars like John Michael Montgomery, Martina McBride, Dwight Yoakum, and more took to social media to share their sentiments about Frey’s death.

I can’t believe Glen Frey of the Eagles has passed awayI grew up listening to him and the Eagles a lot, a huge influence,so sadRIP Glen Frey

But, unlike the others, country singer Travis Tritt has a unique Glenn Frey memory to hold on to that few others do. In an interview with Rolling Stone Country, Tritt shared details of the day he was on hand to witness an Eagles reunion after the group had taken a break from touring.

In 1993, an Eagles country music tribute album called Common Thread was created. Some of the songs recorded for that project went on to be released as singles such as Clint Black’s rendition of “Desperado” and Travis Tritt’s cover of “Take It Easy.” Tritt suggested that the video for “Take It Easy” reunite the band’s classic lineup (Frey, Don Henley, Don Felder, Joe Walsh and Timothy B. Schmit), who hadn’t performed together since the group disbanded in 1980.

“It was only just an idea that I had and I had no way of knowing whatsoever that that would be the catalyst that would launch them back into going back out and working together again after being on a 14-year hiatus,” recalls Tritt. “All I knew was these guys had inspired me so much to want to be a musician and be a songwriter, and do music that appealed to people.”

Tritt was particularly impressed with Frey whose actions and words during that reunion helped teach Tritt a lesson he has never forgotten.

“Here’s a guy that was one of the biggest rock stars of our generation that was never, ever too big of a star in his own mind to stop and talk and encourage and acknowledge anybody, regardless of their stature in the business,” Tritt recalls. “He didn’t have to do that and that’s a great lesson not only for me, but anybody in this business: to never get above your raising.”

Tritt also sang the praises of Frey’s work ethic, attention to detail, and love for music, calling him “one of the greats of our time.”

“If you look at the entire catalog of all the things that the Eagles did for all those years, not to mention the things that Glenn did in his solo career, it’s always just always top notch,” says Tritt. “It shows that not only did he have a tremendously high work ethic, but he also had a tremendous love for what he did. It was a love and a passion for music that honestly, I really think anybody in our business has to have in order to be successful in it. It was an inspiration just to be around him and to listen to the songs that he did both with the Eagles and on solo projects and just know that he was one of the greats of our time.”

Travis Tritt’s idea to reunite the Eagles for the “Take It Easy” video would lead to a full-blown reunion tour in 1994 that they aptly named the Hell Freezes Over Tour.

Watch Travis Tritt‘s official video for “Take It Easy” featuring the Eagles below.