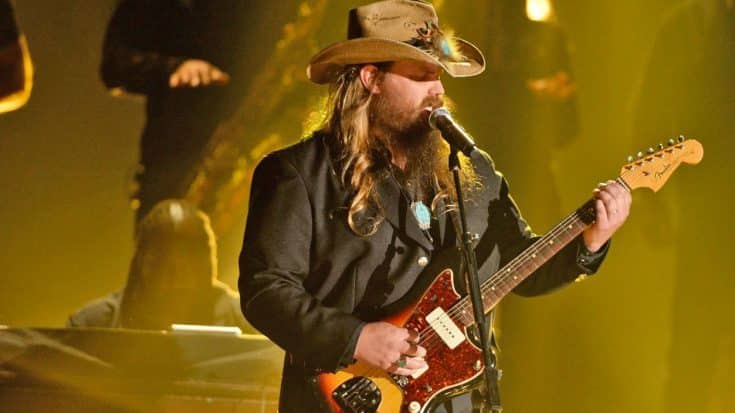 On January 16, 2016 the soulful singer songwriter crushed a career milestone.

For decades, some of music’s best and most talented artists have been playing on the iconic Saturday Night Live stage. Chris Stapleton made his debut, and absolutely nailed it!

For country singers, making it to the SNL stage is no easy feat. Stapleton is only the fourth country artist to appear on SNL since Taylor Swift hosted and performed in 2009. Zach Brown Band and Blake Shelton have also hosted to show, but no country artists appeared in either of the seasons prior.

First, he sang his song, “Parachute” alongside his wife Morgane and his band. Morgane is often seen on stage with Stapleton, and if you’ve heard her voice you understand why. The couple harmonizes perfectly together! Watch Stapleton’s performance of “Parachute” in the video below.

Later in the evening he returned to the SNL stage once again. This time he played another familiar tune from his album, Traveller. “Nobody to Blame” is Stapleton’s most recent single, and the bluesy song gives him the opportunity to showcase his soulful voice. Stapleton and the band even had a moment to show off with a mini-jam session at the end of the performance.

Stapleton’s debut album, Traveller is Grammy-nominated, and landed at #1 on the all-genre Billboard 200 chart last year. After the November 2015 CMA Awards, Stapleton’s career took off. The singer won Album of the Year, New Artist of the Year, and the coveted Male Vocalist of the Year. Impressive! But who could forget that jaw-dropping performance with Justin Timberlake?

Now Stapleton is making more musical strides, and we can’t wait to see what is next! Watch him close out the January 16th episode of SNL with “Nobody to Blame” below.