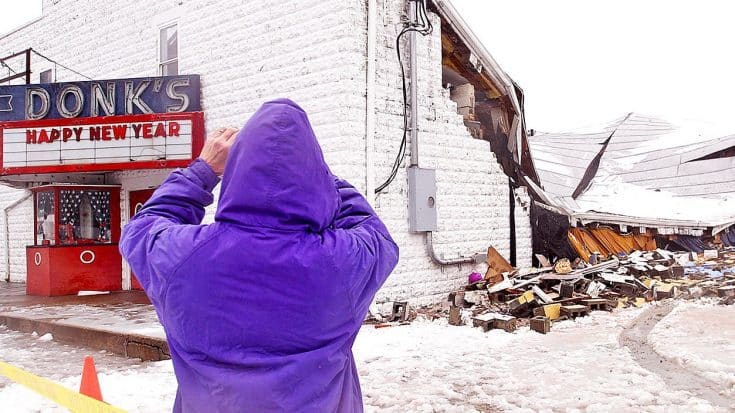 Due to the severe winter weather on Friday, the roof collapsed on Hudgins, Virginia’s famous “Lil Ole Opry” building.

Officially named Donk’s Theater, the Lil Ole Opry has been open since 1975. According to the theater’s website, shows are made up of two halves with an intermission in the middle. The atmosphere and all of the shows are “family friendly” and the theater tries to make ticket prices affordable.

Wavy 10 reports that following the severe storms on Friday, the roof on the 76-year-old theater building collapsed, along with multiple walls.

Mathews County Building Official, Jamie Wilks, says that the building is a total loss, and that the remains have to be torn down.

“The roof went first,” Wilks tells reporters. “Then side walls blew out and the back of the theater spit chunks of concrete from the building. The costumes, the chairs, and the stage itself now trapped inside.”

Many of the locals are heartbroken to see the beloved, historic theater in such a state. For Lynda Smith, whose family performed at the Lil Ole Opry over the years, the loss of the theater feels like losing a family member.

Since the theater got its start, it has attracted many local talents as well as major country superstars such as Dolly Parton and Little Jimmy Dickens. The theater is so important to its community and the country that it has even been listed on the National Register of Historic Places.

Although the theater cannot be saved, Smith says the community is determined to make sure the music continues, even if it can’t be in the original Lil Ole Opry building.

“We plan to make music somehow, somewhere, we will do it,” she says.

You can watch Wavy 10‘s full report on the building’s collapse below.

Our thoughts and prayers go out to those in Hudgins and the surrounding community.