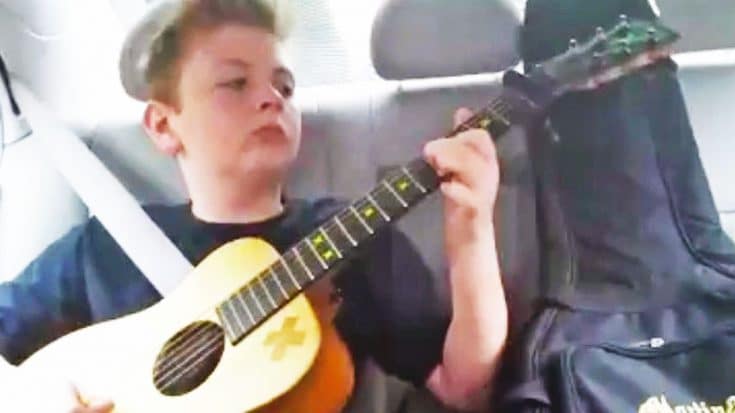 At the young age of 12, Landon Wall has already spent half of his life playing guitar. In the years since he received his first guitar as a Christmas present, he has continued to grow as a musician, singer, songwriter, and actor.

Already, Landon has performed at many of Nashville’s most popular venues, including the Bluebird Café, Tootsies, and The Nashville Palace. Recently, Landon had the chance to perform at the Carolina Country Fest along with “Wanted” singer Hunter Hayes.

Landon has even started recording music in Nashville, and recently wrapped up recording a new song called “Small Town Love” along with another young artist named Tegan Marie.

Before Landon left to record his new song, he posted a video to his personal page showing off his rockin’ rendition of the classic children’s song, “Mary Had A Little Lamb.” The video ended up going viral, and as of January 26, has nearly 6 million views on Facebook.

In the video Landon is sitting in the backseat of a car holding his guitar and talks to the camera, saying, “When you’re twelve years old and have a guitar in your hands, there’s always somebody out there who thinks you’re gonna play ‘Mary Had a Little Lamb.’ I don’t want to disappoint them.”

Landon has no need to worry, because he doesn’t disappoint with his performance! He starts off softly strumming the first few, recognizable notes to the tune before he breaks into a full-out jam session.

Not only does Landon show off his unbelievable guitar skills in the video, but his talent as a singer as well, singing a modified, rock ‘n roll version of the beloved song.

Tune in to the video below to see Landon jam out to “Mary Had a Little Lamb,” and it won’t take you long to understand why this video has people buzzing.

We have a feeling we’re going to see a lot more from Landon in the future!