Joey Feek Is Making The Most Of Every Moment 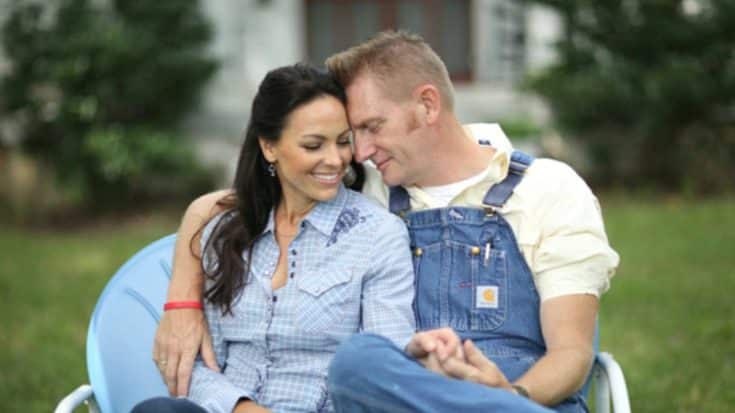 Joey Feek isn’t wasting a single moment. It’s been more than a week since her husband, Rory, has posted an update on the singer’s terminal cancer battle. The delay had many fans worried about Joey’s health. But, according to a new photo posted to Facebook, Joey is still fighting.

The photo shows Joey in bed with her almost-two-year old daughter, Indiana, in her lap and other family members near the singer’s bed.

“My sister Marcy reminiscing w Joey (and Indy) about how they started the restaurant together nine years ago,” the caption reads. “What a beautiful blessing Marcy Jo’s has been to our family and so many others.”

…my sister Marcy reminiscing w Joey (and Indy) about how they started the restaurant together nine years ago. What a beautiful blessing Marcy Jo’s has been to our family and so many others.

Marcy Jo’s is a mercantile store-turned-restaurant and bakery opened near the couple’s Tennessee home by Rory’s sister, Marcy, along with Joey Feek in January of 2007. According to Marcy Jo’s website, “Once a major gathering place for the farmers and families of the area, it’s now a charming restaurant and bakery, thriving with new life, great fellowship and food,” the site reads. “Whether it’s the breads and bakery items that are homemade every morning or the gourmet country cooking that came from family recipes, you’re sure to love your visit. You never know, Joey and Rory might even pull out their guitar and sing you a song while you’re there.”

The Feeks haven’t returned to Marcy Jo’s since they couple made the move to Joey’s hometown of Alexandria, Indiana, in October. The steady decline of her health kept the couple from returning to their Tennessee farmhouse, but the move has allowed Joey to spend precious time with her parents and sisters, much of which has been documented by Rory on his blog, This Life I Live.

“Joey and her family have laughed together and shed many tears as they’ve walked down memory lane together – reminiscing about their school days, the Halloweens and Christmas’s, and the journey that has brought them and all of us here,” Rory wrote in October. “They’ve swallowed hard and had some difficult conversations that they didn’t want to have.”

Less than two weeks after the above statement was posted on Rory’s blog, Joey entered Hospice care. In a recent interview with PEOPLE, Rory got candid about Joey’s outlook and what he is doing to preserve her memory.

“As Joey has had to learn to come to terms with what is happening to her body and what the future holds, it’s been important to her to share some things that she wants me and our girls to remember after she’s gone,” Rory said. “More than once, I have found myself beside her bed taking notes as she shares things like when the best time to plant the garden will be this spring, how to prune the fruit trees and to make sure we still set aside a percentage of what we make as a tithe each month.”

Rory has also been busy taking photos and videos that he will use to keep his wife’s memory alive.

“Without realizing I was doing it, God has allowed me to capture hours and hours of Joey and her life at home on the farm, raising Indiana and playing music,” he told PEOPLE. “I can’t help but believe that those clips will be an important part of keeping Joey’s memory alive in Indy’s heart.”

Watch a clip of a touching interview Joey and Rory did with Bill Gaither in which they talked about their new album, “Hymns That Are Important To Us,” and how their faith has helped her deal with her terminal cancer diagnosis.