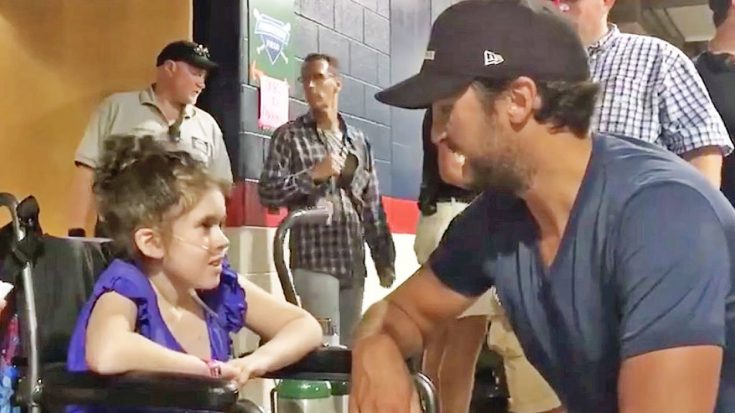 In July, nine-year-old country music fan Addi Keegan’s wildest dream came true when she got the chance to meet her favorite singer, Luke Bryan. Since Keegan had cancer, the moment was extra special for her and her family, as they were originally unsure if she’d be able to make it to Bryan’s show.

Keegan battled cancer for most of her life, as doctors discovered her first tumor when she was only 22 months old. Over the years, Keegan underwent endless rounds of chemotherapy, radiation, and other treatments to fight the cancer.

A week before Bryan was scheduled to come to Keegan’s hometown of Cleveland, Ohio, the little girl was at home on hospice. Since it seemed like she would be unable to make his show, the non-profit organization A Special Wish Cleveland put together a personal concert at Keegan’s home. They invited local band Country Redford to perform, and they sang Bryan’s biggest hits for Keegan.

Later, Keegan felt well enough to attend Bryan’s show. Once again, A Special Wish stepped in to help create a memorable moment for the little girl and her family. Keegan got the chance to meet Bryan before his show, and the priceless moment was caught on camera.

Bryan asked Keegan what her favorite song was, and she told him it was “Play It Again.” So when Bryan played the song later that night, he offered a shout-out to Keegan, who was watching with her family from a private box.

The video of Keegan’s meeting with Bryan has now been viewed thousands of times. It’s clear that her story touched the hearts of country fans far and wide.

That’s why we are incredibly saddened to report that Keegan passed away earlier this month, on September 4. The news was reported by the Amherst News-Times, which published an article about her classmates going on a walk to look for rainbows in her honor, since she was fascinated by rainbows.

As of press time, Bryan has not responded to the news. Country Redford shared a photo on Facebook in memory of Keegan, and wrote that they would continue to perform “Play It Again” at every one of their shows from now on.

You can remember Keegan by watching the touching video of her meeting with Bryan below. Our thoughts and prayers go out to her family, friends, and loved ones during this sad time.

Posted by A Special Wish Cleveland Chapter on Sunday, July 16, 2017