By Miranda Raye on February 10, 2016
Advertisement 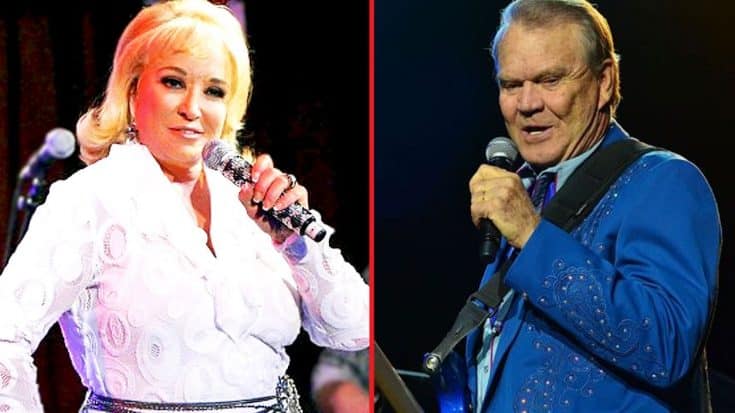 While talking about Tanya Tucker‘s life, it’s a challenge not to mention her personal relationships with other celebrities, especially fellow country star Glen Campbell.

Tucker and Campbell dated between 1980-1981, following Campbell’s divorce from his third wife, Sarah. Throughout their short relationship, Tucker and Campbell recorded some songs together, including the duet “Dream Lover.” Even though the pairing of two country superstars sounds like the perfect match, the relationship was stormy, producing a wealth of gossip and tabloid articles as a result, and they eventually split.

The same year that Campbell and Tucker ended their relationship, Campbell met his now-wife Kim on a blind date and they were married in 1982. Together, the couple has three children, Cal, Shannon, and Ashley, but Campbell also has five children from his previous marriages.

In 2011, Campbell revealed that he had been diagnosed with Alzheimer’s, and decided to go on a final “Goodbye Tour” with his three youngest children. As his condition worsened over the years, Kim was forced to make the difficult decision to place him in a long-term care facility in Nashville.

However, two of Campbell’s older children from his previous marriages, Debby and Travis, took legal action against Kim, with NBC reporting they claimed she had “secluded” them from their father and prevented them from “participating” in his care.

Now, Tucker has decided to take her own form of action to help the case of Campbell’s children, telling Cleveland.com she plans to go straight to the House of Representatives.

“I’m going to be speaking at the House of Representative next week on the problem that has arisen with his wife and his older children,'” she says. “They can’t even go in to see him. I have a real hard problem with that.“

According to the way Tucker talks, it sounds like she’s working with Campbell’s children to pass some sort of legislation that would allow older children from previous marriages to visit a parent when they are ill:

“He has eight kids, not just the three that are theirs. They’re being locked out of being with their dad, and I’ve got to join forces with them. We’re going to get legislation passed that doesn’t discount the older children when there’s a different wife involved.”

Even though Tucker and Campbell broke up years ago, Tucker’s heart still breaks knowing the condition he’s in. “It’s just horrible what he’s going through,” she says.

We wonder how Tucker’s meeting with the House of Representatives will go? If we know anything about Tucker, we’re sure she’ll be able to make everyone listen to her, since she knows how to take control of a stage. You can see for yourself in her performance of “Strong Enough to Bend” below.

What do you think about this whole situation involving Campbell and his children?