How Sammy Kershaw Went From Roadhouse Gigs To Country Stardom 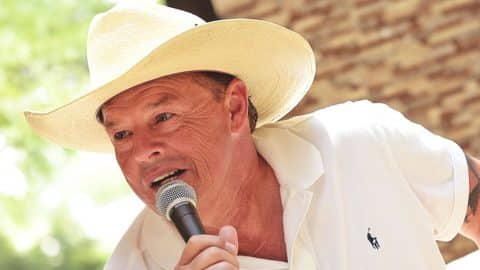 Born on February 24, 1958 in south Louisiana, Sammy Kershaw took to music from an early age. His grandfather gave him his first guitar when he was only 11 years old, and his father passed away that same year. As a result, Kershaw took his guitar along with him to perform gigs at various roadhouses in the evenings to help support his family, in addition to working several day jobs.

When he was still a young teen, Kershaw opened shows for legendary artists such as Ray Price, Merle Haggard, and George Jones. Kershaw took a break from music in 1988, and served as a remodeling supervisor at Wal-Mart in the meantime. But three years later, he returned to country music, and released his debut album, Don’t Go Near the Water.

Kershaw’s debut album was one of three albums that would go on to be certified Platinum by the RIAA, with two more being certified Gold. In total, Kershaw has seen more than 25 of his singles find their way into the Top 40 on the charts, with one number one hit and ten top ten hits to his name.

Although Kershaw may have started his career performing in roadhouses to help his family scrape by, he found his place in the country music world and reached a level of stardom others only dream of. Kershaw’s success has been the result of his many hit songs, and we’ve gathered some of our favorites below.

Released on February 9, 1993 as the first single from his second studio album, Haunted Heart, “She Don’t Know She’s Beautiful” is considered to be Kershaw’s trademark song.

“She Don’t Know She’s Beautiful” is Kershaw’s only number one single, and topped the country charts in both the U.S. and Canada. The song also crossed over to claim the 19th spot on the Billboard Hot 100 following its release.

In the song the narrator sings about his love, and how she’s completely unaware of how beautiful she is. The narrator says he always thinks his girl is beautiful, but she doesn’t feel the same, singing, “Morning comes and her hair’s all a mess/That’s when she thinks she looks her worst/It’s times like this she don’t know why/I can’t take my eyes off her.”

The song is a catchy one, since it repeats the same lines over and over again throughout the chorus and at the end. With that in mind, it’s no wonder this song was such a hit for Kershaw.

“Queen of My Double Wide Trailer”

One of Kershaw’s ten top ten hits, “Queen of My Double Wide Trailer” was released on August 23, 1993 as the fourth and final single off of his album, Haunted Heart.

The song ended up peaking at the seventh spot on the Billboard country charts in the U.S., and was actually a bigger hit in Canada, where it claimed the third spot on the charts.

Written by Dennis Linde, the song is much more humorous in tone than “She Don’t Know She’s Beautiful,” which shows off Kershaw’s talent as a performer. The narrator tells the story of how he met a country girl “fresh from the farm,” and how they ended up falling in love. Due to the attraction between the two of them, the narrator sings, “So I made her the queen of my double wide trailer/With the polyester curtains and the redwood deck.”

However, the narrator can’t seem to keep track of his new love, since she often runs away from home. On one occasion, he even catches her with a man named Earl who he describes as “the Charlie Daniels of the torque wrench.”

The music video for “Queen of My Double Wide Trailer” is just as fun as the song itself, and perfectly shows off Kershaw’s comedic side.

“Third Rate Romance” wasn’t originally recorded by Kershaw. In fact, the song was first recorded by the country rock group Amazing Rhythm Aces in 1974. Their version was a chart success, hitting number one on the Canadian charts and peaking at the 11th spot on the U.S. country chart.

Kershaw covered the song for his 1994 album, Feelin’ Good Train, and released it as a single that same year. Although his version was not as big of a hit in Canada as the Amazing Rhythm Aces’, it experienced greater chart success in the U.S., where it peaked at the second spot on the Billboard Hot Country Songs chart.

The song is written in a third-person point of view, and tells the story of a man and a woman who meet at a restaurant and take off to a motel for a one-night stand. Without saying a word, the couple knows exactly what they want from one another, with the narrator relaying their conversation as they prepare to enter their motel room, singing “She kept saying/’I’ve never really done this kind of thing before, have you’/Third rate romance/Low rent rendezvous/And he said, ‘Yes I have/But only a time or two.’”

For Kershaw’s music video, the director Michael Merriman decided to take a slightly different spin on the portrayal of the song. The video shows a young woman who tricks an old man into going to a motel so she can steal his money and leave. Kershaw stands by as the song’s narrator, revealing the hilarious story as it unfolds.

When Kershaw lost his father at a young age, he had to do whatever he could to help support his family. But the whole time, he never lost sight of his dreams, and was able to find his way into the country music industry while he was still in his teens.

Years later, Kershaw is now a successful country music star, and remains active in the industry. His latest album, I Won’t Back Down, was released in 2015, and he shows no signs of slowing down soon.

After a difficult past, Kershaw continues to accomplish great things in country music, and serves as an inspiration to all aspiring artists because of it.