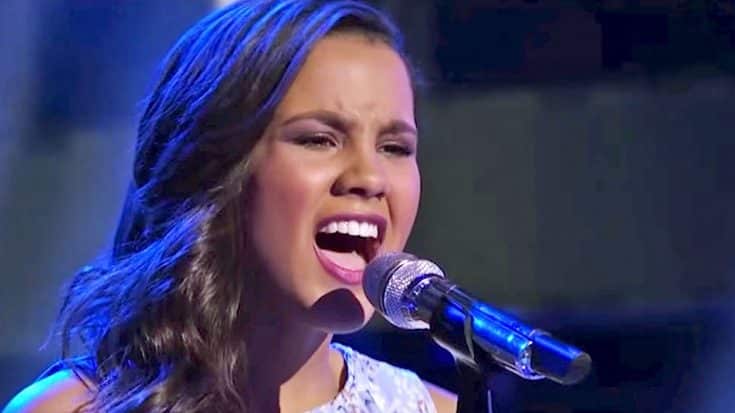 Since her first audition on American Idol, 15-year-old Tristan McIntosh has captured the hearts of the judges and viewers alike.

McIntosh earned her Golden Ticket to Hollywood with an heartfelt performance of Mickey Guyton’s  “Why Baby Why.” But it was McIntosh’s reunion with her mom, Amy, who had been serving overseas in the Army, that made her audition truly memorable.

Since her first audition, McIntosh has worked her way into the Top 14 with her powerful voice and stage presence. Wednesday night (Feb. 24), McIntosh took to the stage to fight for her place in the Top 10 on American Idol, and chose to sing a song she holds close to her heart.

McIntosh first sang Rascal Flatt‘s emotional ballad “What Hurts the Most” for her solo Hollywood performance. She dedicated her performance to her mom, and won the judges over with her ability to tie emotion into her performance.

Since her first performance of the song went so well, McIntosh decided to perform it yet again in hopes of earning a spot in the Top 10. Her performance this time around was even more emotional than the first, and was a perfect showcase of the beauty and maturity of her voice. When you listen to McIntosh sing, it’s hard to believe she is only 15 years old, because she has a talent beyond her years.

Needless to say, the judges were once again blown away by McIntosh’s voice, and had great amounts of praise for her when she was finished.

“First of all, let me say that was a beautiful song choice, for your voice, for the way you did it,” said judge Keith Urban. “I really felt like we heard and saw a side of you we haven’t seen yet. Beautiful.“

Following the Top 14’s performances, the judges saved four contestants who will move on to the Top 10, while viewers now have to vote to save their favorite six remaining contestants. Although McIntosh was not saved by the judges, we have no doubt after her stunning performance that the viewers will send her into the Top 10.

You can watch McIntosh perform “What Hurts the Most” below. What do you think of her rendition?