‘Hello, I’m Johnny Cash’: The Songs & Stories That Made ‘The Man In Black’ 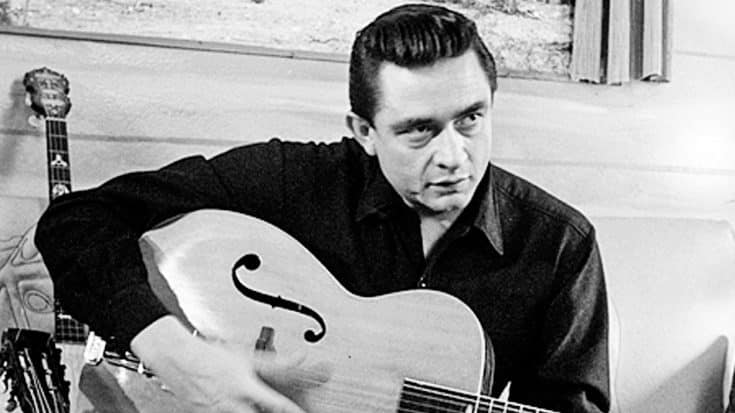 On February 26, 1932, a boy by the name of J.R. Cash was born in Kingsland, Arkansas. Years later, that boy became known as Johnny Cash, one of the most influential musical artists in history.

Cash was drawn to music from a young age, and often sang as he worked in the cotton fields with his family during the Great Depression. After learning how to play guitar from his mother and a friend, Cash started writing and playing his own songs when he was only 12 years old.

When he was 18, Cash enlisted in the United States Air Force, and he formed his first band while he was stationed in Germany. Cash was honorably discharged from the Air Force in 1954, and returned back to the United States afterwards.

Cash moved to Memphis, Tennessee later that same year, where he worked as an appliance salesmen while studying to become a radio announcer. Eventually, Cash gathered up the courage to visit the legendary Sun Records studio in hopes of obtaining a recording contract. Cash managed to win over producer Sam Phillips with his rockabilly-style performances, and recorded his first songs for the label in 1955.

Cash’s first two songs “Hey Porter” and “Cry! Cry! Cry!” were just two of many hits to come. He was one of the biggest stars of his time, and even went on tour with the famous Carter Family, which is how he got to know the woman that would eventually become his wife, June Carter.

Known for his deep, baritone voice, there was no one else out there in the music industry that sounded like Cash, and there still isn’t to this day. Almost every time he stepped on stage, Cash would introduce himself by saying, “Hello, I’m Johnny Cash.” Called “The Man In Black” due to his black attire he typically wore on stage, Cash was just as well-known for his somber “outlaw” image as he was for his songs.

Cash is still considered as one of the greatest musicians of the 20th century, and is one of the top-selling artists in history, with over 90 million records sold worldwide. When Cash passed away on September 12, 2003 at the age of 71, he left behind a vast library of musical works, including countless number one singles.

In honor of what would have been The Man In Black’s 84th birthday, we’d like to honor him with three of his iconic songs.

“I Walk The Line”

During a telephone interview cited in Sing Your Heart Out, Country Boy by Dorothy Horstman, Cash said he wrote the song shortly after marrying his first wife, Vivian.

“I wrote the song backstage one night in 1956 in Gladewater, Texas,” Cash said. “I was newly married at the time, and I suppose I was laying out my pledge of devotion.” Cash originally thought the song would be a slow ballad, but his producer liked the faster arrangement, and that’s the one that stuck.

The lyrics tell the story of a man who is completely devoted to his love, singing “As sure as night is dark and day is light/I keep you on my mind both day and night/And happiness I’ve known proves that it’s right.” As for the rhytmn, it takes on the “freight train” style found in many of Cash’s other songs.

Rolling Stone ranked “I Walk the Line” as the 30th best song on their list of the 500 Greatest Songs of All Time in 2004, and when you watch Cash perform it, you can tell why.

Cash, was inspired to write “Folsom Prison Blues” while he was stationed in Germany, after he saw the film Inside the Walls of Folsom Prison. He released the song for the first time in 1955 on his debut album With His Hot and Blue Guitar, and it soon became one of his signatures.

In 1968, Cash re-recorded the song during a performance at the real-life Folsom State Prison, and it was this live recording that became a chart-topping country hit. The live version of song was ranked as the 8th best song on Pitchfork Media‘s list titled The 200 Greatest Songs of the 1960s. In 1969, Cash also won the first Grammy Award of his career with the live recording of the song.

The song tells the story of man who finds himself stuck in Folsom Prison after he “shot a man in Reno just to watch him die.” While sitting in the prison, the narrator hears a train rolling by, and he thinks about how much he wishes he was on that train, singing, “Well I know I had it coming, I know I can’t be free?/But those people keep a movin’/And that’s what tortures me…“

Over the years, many other country artists have recorded their own versions of Cash’s hit song, including Merle Haggard, Waylon Jennings, and Brooks & Dunn. Of course, Cash’s version is still the most recognizable today.

Written by June Carter and Merle Kilgore, “Ring of Fire” was recorded by Cash and released on April 19, 1963. The song was originally recorded by Carter’s sister, Anita, but it was Cash who turned it into the hit we know today.

The “ring of fire” mentioned in the song is supposed to refer to the act of falling in love, which makes sense because Carter was falling for Cash at the time she wrote it. In the song, the narrator is consumed by his love like a fire consumes everything in its path, singing “I fell into a burning ring of fire,/I went down, down, down and the flames went higher/And it burns, burns, burns,/The ring of fire, the ring of fire.“

Cash liked the song when he heard the original recording done by Carter’s sister, so when the song wasn’t much of a success for her, Cash took it and made it his own. Some of the changes he made were the addition of mariachi horns and tweaked versions of the original phrases.

All of the changes Cash made were for the best, since “Ring of Fire” became the biggest hit of his entire career. The song remained at the number one spot on the charts for seven weeks, and was certified Gold by the RIAA in 2010. In 2003, CMT ranked the song in the 4th spot on its 100 Greatest Songs in Country Music list.

Cash released a number of memorable songs throughout his career, but “Ring of Fire” is the first many think of when they remember The Man In Black.

One only has to look at the extensive list of songs Cash released over his career to release how much of an impact he had on the music industry as a whole. Today, dozens of his songs remain treasured classics, proving the timeless nature of their stories and Cash’s voice.

The world lost a true legend when Cash passed away in 2003, but he created an evergreen legacy in the songs he left behind.