99-Year-Old Fiddler Player Blows Everyone Away With Opry Performance

By Manly Bryant on August 26, 2016
Advertisement 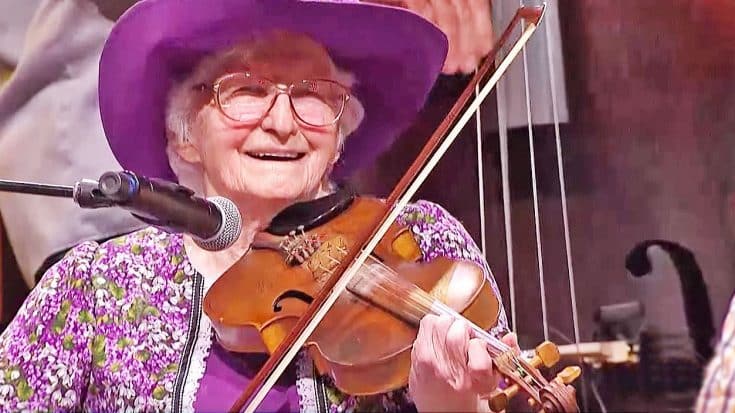 Violet Brumley Hensley, also known as the “Whittling Fiddler,” has been a musician for most her life, a fact made apparent every single occasion she takes stage.

“I’ve had the privilege to introduce a lot of great people on the Grand Ole Opry,” announces Mike Snider who accompanies Violet in a performance of “Angeline the Baker” on the banjo. “But it’s rare that I get to introduce a national treasure and I have one sitting here next to me.”

At 99 years of age, Violet completely blows away the audience with her performance on the Opry stage. With each and every stroke of her fiddle the almost century long experience shows through.

Violet was born in 1916 in Arkansas to musician and fiddle maker George Washington Brumely. Observing the fiddle-making techniques of her father, Violet designed and wood-worked her very first instrument, a fiddle.

The legendary fiddler was designated in 2004 as the Arkansas Living Treasure by the Arkansas Arts Council. Violet has made several television appearances including “The Beverly Hillbillies” in 1969, “The Art Linkletter Show” in 1970, “Captain Kangaroo” in 1977, as well as “Live with Regis and Kathy Lee” in 1992. National Geographic also wrote an article about the fiddler in 1970.

You can watch the national treasure’s captivating performance in the video below but be prepared to be blown away.