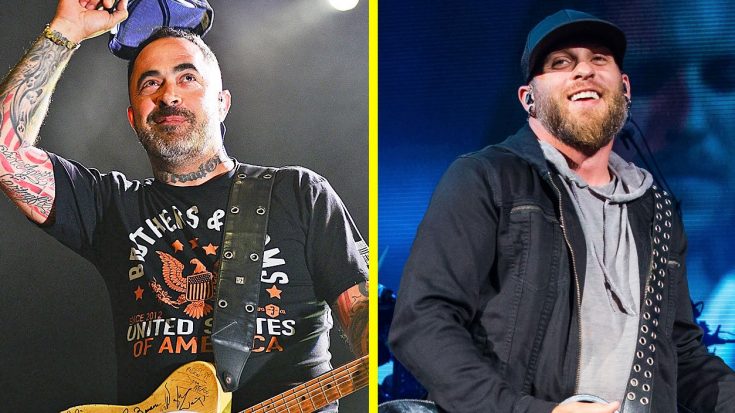 With 2017 coming to a close, artists are beginning to reveal their plans for 2018. On Monday (October 16), country fans were thrilled to learn that two major stars are teaming up for what is going to be the must-see country tour of 2018.

As announced via a press release, Brantley Gilbert (“One Hell of An Amen,” “Bottoms Up,” “You Don’t Know Her Like I Do”) is all prepared to kick off a brand-new tour in 2018. Called The Ones That Like Me tour, 19 show dates have been announced so far.

The tour will kick off on February 1 at the DCU Center in Worcester, Massachusetts. Other stops include Knoxville, Tennessee, Dayton, Ohio, and Grand Rapids, Michigan. Tickets are already available online, and you can get them right here!

Rising country star Josh Phillips will join Gilbert on tour as one of his supporting acts. The other artist who has signed on for the tour is none other than Aaron Lewis, who had one of the top country albums of 2016 with Sinner.

Since making his country music debut with his 2011 EP Town Line, Lewis has developed a strong and passionate fan base. After topping the Country Albums chart with Sinner following its 2016 release, Lewis’ schedule filled up with one performance after the next.

During 2017, Lewis was unarguably one of the busiest country singers. He spent a large portion of the year on his Sinner Tour, and is currently co-headlining the Sinners & Sanctified Tour with Southern rock/country band Blackberry Smoke.

Now, Lewis is all geared up to join Gilbert on The Ones That Like Me tour in 2018. His addition to the tour is one that has country fans all pumped up to snag their tickets to one of the shows. After all, how often are you able to catch two big superstars like them in the same place at the same time?

Be sure to grab your tickets to The Ones That Like Me tour now so that you can get the best seat in the house! You know you want to be right up there where all the action is! You can get your tickets for any of the tour’s various shows by clicking here.

After you get your tickets, tune in to the clip below to catch Lewis’ live performance of “That Ain’t Country.” This will give you a good taste of what to expect from him when you see him on tour!