ACM Video Of The Year Winner Declared Amid Stiff Competition

By Manly Bryant on April 15, 2018
Advertisement 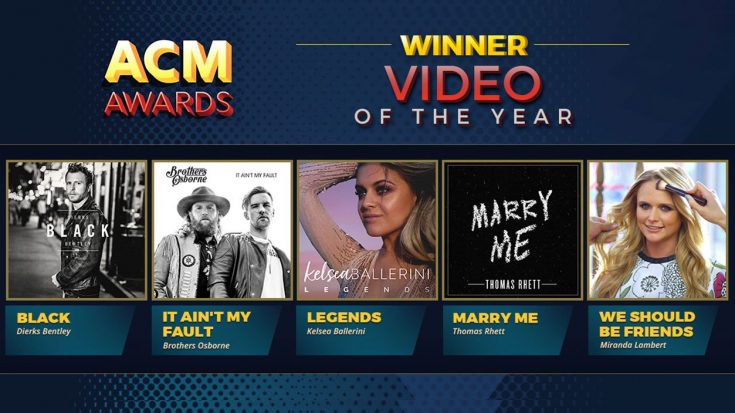 With a major buzz surrounding this year’s heart-stopping collection of music videos nominated for one of the ACM Awards‘ top categories – there’s no wonder why the crowd fell silent awaiting the winner’s reveal!

During the 2018 ACM Awards at T-Mobile arena in Las Vegas, all of the cherished nominees for the coveted Video of The Year award were gathered along with thousands of their friends and colleagues – anxiously awaiting the announcement as part of the evening’s festivities.

The nominees for this year’s video category were all great choices and it made for some very stiff competition. Dierks Bentley was nominated for “Black,” Miranda Lambert for “We Should Be Friends,” Brothers Osborne for “It Ain’t My Fault,” Kelsea Ballerini for “Legends,” and Thomas Rhett for “Marry Me.”

With such a collection of impressive music videos, it’s clear that it was a tough call to make!

But in the end, none other than the immensely talented and downright magical “It Ain’t My Fault” by Brothers Osborne –  took home the night’s top video honors!

Tell us if you think the award went to the right person in the comments – and watch this award-winning video below!

Congrats to Brothers Osborne on their great win!