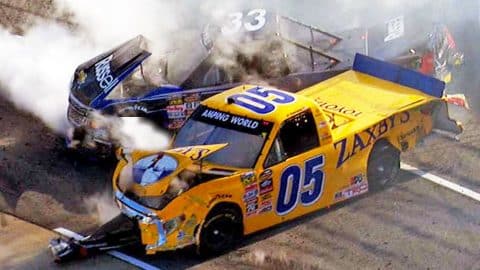 Following news that other drivers had been suspended from racing due to injuries, yet another one is banned from the track for at least one upcoming race.

John Wes Townley, who had been involved in a multiple-crash race back in June, also grappled with fellow driver Spencer Gallagher on the track during that same event. Now, he’s seeing the repercussions from his collisions surface as head trauma – that doctors believe require him to stay out of the driver’s seat.

His medical clearance was revoked before the July 7th NASCAR Truck race series in Kentucky, and again, he is not cleared to race in the upcoming Eldora Speedway race on Wednesday, July 20th.

Catchfence.com first reported that Townley’s spokesman revealed he wouldn’t be cleared to race due to a “possible concussion”.

His team, Athenian Motorsports, confirmed the news to the sports site, while his teammate, Brady Boswell, announced he would be the fill-in on Facebook.

Townley’s last race was on June 25th at the Gateway Motorsports Park – the same race in which he and Gallagher engaged in fisticuffs on the track, earning them both hefty fines from the governing body.

The news follows an announcement of Dale Earnhardt Jr. being pulled from a race for the same reason.

We are praying for the quick recovery of both drivers and hope to see them on the track again soon.

Watch Townley and Gallagher’s interesting track fight in the video below.