After Breaking Wrist, Carrie Underwood Has A Message For Fans

By Manly Bryant on November 13, 2017
Advertisement 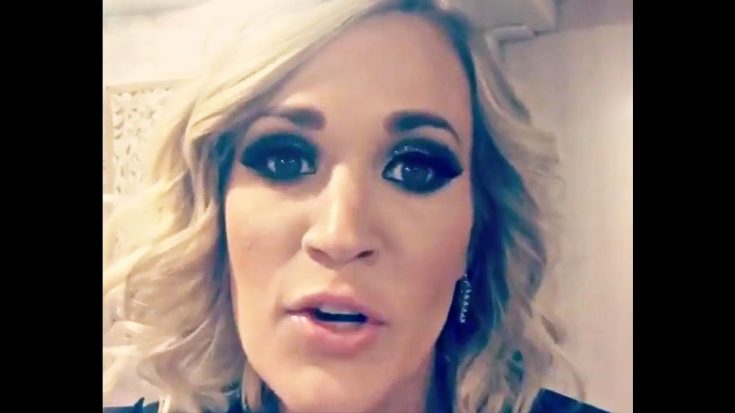 This longtime country superstar took a nasty fall on the steps just outside her home and broke her wrist while suffering other minor injuries late Friday night, according to a statement issued by her rep.

Carrie Underwood most recently made headlines after delivering one of the most impassioned and powerful tributes to the victims of the Route 91 Harvest Festival shooting in Las Vegas at the annual CMA Awards.

In the statement from her rep, it was confirmed that Underwood did, in fact, break her wrist and suffered other abrasions and bruising as a result of the fall. Further details were not available, but the rep also announced that Underwood would be unable to perform at the scheduled tribute concert dedicated to the victims of the Las Vegas shooting and devastating hurricanes that impacted Texas, Florida, Puerto Rico, and the Caribbean.

Just several days after the fall, Underwood herself took to social media to issue a message to fans.

“Thanks so much for the well wishes everybody,” Underwood said in a tweet on Sunday, November 12th. “I’ll be alright…might just take some time…glad I’ve got the best hubby in the world to take care of me.”

Thanks so much for all the well wishes everybody…I’ll be alright…might just take some time…glad I’ve got the best hubby in the world to take care of me.

Currently, she is taking time off of her busy schedule and spending time at home with her recently-retired NHL player husband while he assists her in recovery.

Our thoughts and prayers are with Carrie Underwood as she works toward a speedy recovery and we can’t wait to see her on the stage, doing what she loves, in the very near future!

Watch the video below of her heart-rending tribute to the victims of the Las Vegas shooting.