By Miranda Raye on April 18, 2018
Advertisement 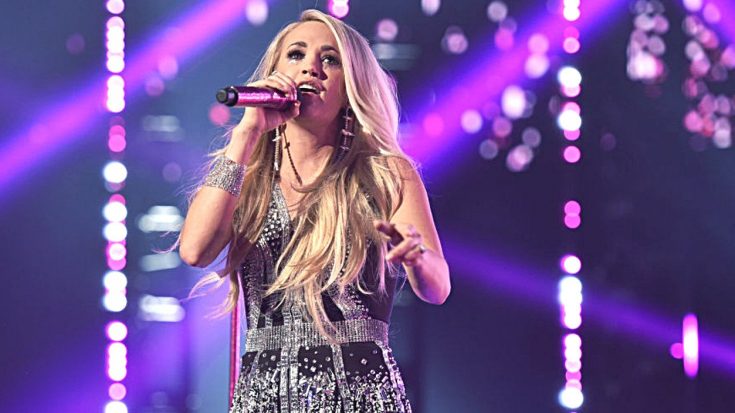 After months out of the public eye following a fall that left her with an injured wrist and 40-50 facial stitches, Carrie Underwood made her return to the stage at the ACM Awards. Underwood’s performance was one of the most anticipated of the night, especially since she was singing her new single, “Cry Pretty.”

Her performance certainly lived up to the hype, as viewers and artists alike watched in awe while she soared through the song. Once she finished singing, the crowd gave her the longest standing ovation of the night. It lasted for 29 seconds.

Since “Cry Pretty” is a new single, country fans figured that a full album would soon follow. After seeing her brilliant ACM Awards performance, the desire to hear more new music from Underwood reached an all-time high.

Now, we finally know when that new music will arrive!

As Underwood shared on Instagram on Wednesday (April 18), her new album, also titled Cry Pretty, is set for release on September 14. In addition to sharing the news of the album’s release date, she also shared its cover art.

To go along with her big announcement, Underwood also shared a trailer to preview what fans can expect to hear on the album. As she said, the song “Cry Pretty” was the thing that sort of set the tone for the album as a whole.

“Sometimes you get together and write a song that is kind of exactly what you’re feeling at that moment, and that was ‘Cry Pretty’ for me,” she said.

As Underwood explained, many of the tracks on the album contain the same “raw” emotions that you hear in “Cry Pretty.” Based on what she had to say, it sounds as though this could be the most emotional album Underwood has ever crafted:

“It’s emotional, and it is real. But there’s also just some incredible musical moments in this song. And I feel like those things are things that go throughout the rest of the album.”

It’s important to note that this is also the first-ever album that Underwood has served as a co-producer on. That means that she has poured even more of herself into every song that appears on the album.

Underwood’s passion for her new music can be felt in her trailer for the Cry Pretty album, which you can watch below. Here’s one other thing we know about it…September 14 is way too far away!