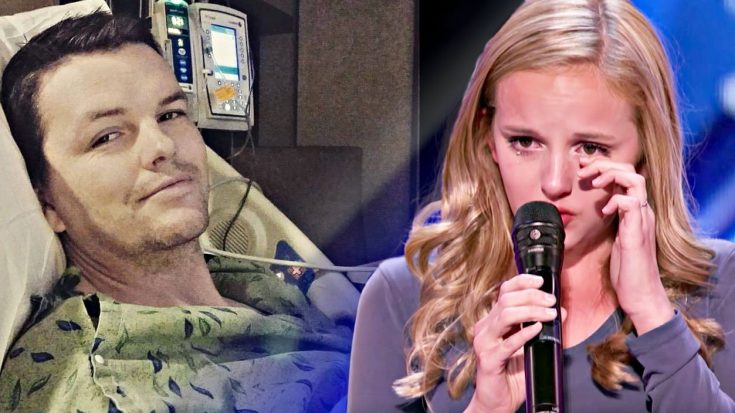 The 13-year-old who brought the judges to tears with her heartbreaking song dedicated to her sick father has just suffered an unimaginable loss – and right before she was set to take the stage for the America’s Got Talent finals.

Evie Clair has wowed America and the entire judging panel throughout her time on the show and earned her way to the finals through a series of enchanting and powerful songs.

Prior to appearing on AGT, Clair was entering into talent competitions and uploading videos of her singing to YouTube – she performed stunning renditions of songs like Carrie Underwood’s “Temporary Home”, gospel classics such as “How Great Thou Art”, and even melodic Christmas tunes like “Mary, Did You Know?”

Earlier in the season, Clair debuted an emotional tribute to her father battling cancer for an audition that brought the audience to their knees. In that performance, her father was watching her from the stage wing but later was hospitalized due to complications from his battle with cancer.

Oh, where to start… I will never meet a greater man than this person right here. He is so strong and never ceases to amaze me with his strength to endure trial. Our family has become very familiar with that word. Trial. Nowadays, almost everyday is considered as a "rough day", but the man I am lucky enough to call my dad, seems to hold it all together. I'm so grateful for a father who loves and supports me. I love you, Daddy. Happy Father's Day!

In the live show semifinal performances, Clair confessed to the judges that her father had fallen quite ill and was unable to travel to see her perform and instead watched from his hospital room.

“Your dad is going to be so proud of you,” Simon Cowell said, getting choked up.

On Thursday, September 7th, 2017, her family made the heartbreaking decision to pull him off of life support. Clair’s next performance was just days away.

I will forever miss my sweet Daddy and cherish the last few moments I had with him, holding his hand, before the end. Love you lots!❤️

“I’ll miss you so much, Daddy. Thanks for teaching me to love salsa and chicken wings and most of all the Lord. Love you lots. RIP: 9/7/17,” Clair wrote on Instagram. “‘Say a prayer, a prayer on forever. Time is only now, Soon we’ll be together.’ I hope I made you proud, Daddy. I’ve always done it for you and I’ll do it for you forever.”

Our hearts are breaking over the loss that Clair and her family have suffered and we continue to keep them in our thoughts and prayers.

A GoFundMe campaign has been established to help her family with the costs of her father’s treatment and final expenses. Click here if you’d like to donate.