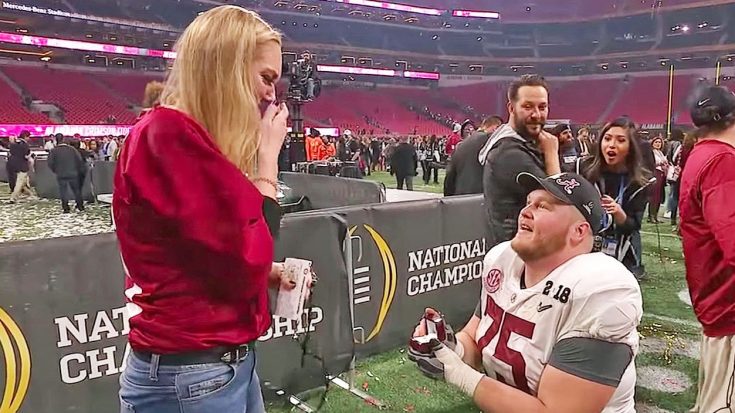 Monday night (January 8) was one that Alabama offensive lineman Bradley Bozeman will never forget. First of all, his team took home the college football National Championship title after battling it out against the Georgia Bulldogs in a game that went into overtime.

As a senior, Bozeman certainly ended his college football career on a high note by being part of a championship team. But the night’s big win wasn’t the only reason Bozeman had to celebrate that night.

Mere minutes after Alabama won the game, Bozeman met up on the field with his girlfriend, Nikki Hegstetter, to ask her an important question. It turns out that Bozeman had been planning to propose all night, and kept his proposal a secret for all of that time.

After sharing a sweet embrace with Hegstetter, Bozeman tossed a newspaper he was holding that was covering up the ring box in his hand. He dropped to one knee immediately after that, while the look on Hegstetter’s face was one of complete surprise.

A number of clips popped up showing the proposal, and while we can’t tell what Bozeman said to Hegstetter, it was apparently the right thing. She obviously said yes, and covered her mouth with her hand as Bozeman slid the ring on her finger.

Once the ring was in place, Hegstetter pulled Bozeman up to her and greeted him with a series of kisses. Everyone standing around the couple shared in their joy, with some expressing just as much surprise as Hegstetter did!

What a way to end such a monumental evening! You can check out the clip of Bozeman’s surprise proposal below.

We want to congratulate Bozeman and Hegstetter on their engagement, and wish them many more years of happiness together!