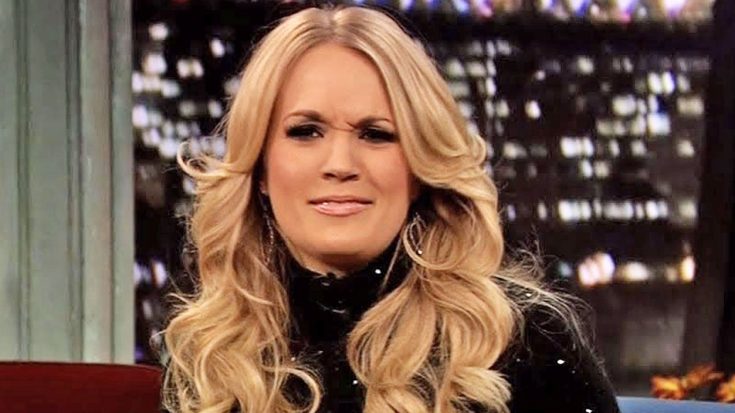 As a huge animal lover, Carrie Underwood follows a vegan diet. Because of that, Underwood can’t resist a good veggie burger, and was excited to try one at a hoppin’ burger joint she stopped by while on tour.

Underwood wrapped up her tour on Monday (November 28) in Utah. To mark the occasion, she decided to drop by one of the local burger joints for a bite to eat. It was apparently a popular place to stop, with Underwood writing on her Instagram that “everyone else” was eating there.

Knowing that Underwood doesn’t eat meat, the people in the burger joint were happy to let her know that they served a veggie burger. Underwood ordered one based on their recommendation, and eagerly waited for her tasty sandwich to arrive.

But the veggie burger Underwood ended up receiving was different than the one she was expecting. She shared a photo of the disapointing meal on Instagram, writing that everyone “lied” about the burger being a veggie burger.

Instead, the burger Underwood was given was simply a bun with lettuce, tomato, and some sort of sauce. It certainly wasn’t the sandwich that Underwood was looking forward to!

Underwood was also quick to point out the fact that the sandwich wasn’t a true veggie burger. “#tomatoesarefruit” she wrote, calling out the restaurant for trying to pass off tomatoes as a vegetable.

When the burger place that everyone else is eating at says they have a veggie burger…they lie. #thisisnotaveggieburger #tomatoesarefruit #gotmyhopesup

Even though Underwood’s sandwich wasn’t anything like she expected, we still think it looks pretty tasty, don’t you? It’s basically a BLT without the B.

Now that Underwood has wrapped up her Storyteller Tour, she can have some downtime at home, where she can make all of the veggie burgers she wants!