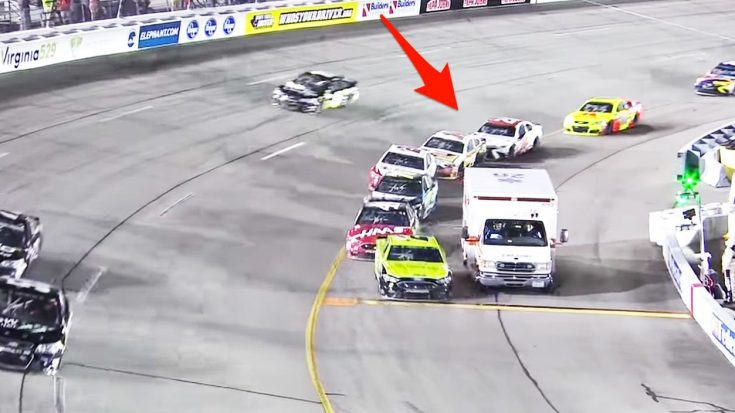 With one driver forced to quit the race early due to damage, others were furious at this calling it “inexcusable” and shaming officials over their mistake.

During the NASCAR Cup Series race at Richmond International Speedway this past weekend, a bizarre incident forced drivers into a high-speed bottleneck as they tried to enter Pit Road.

In the full video of the incident, you can see one of the ambulances running down the inside of the track and then come to a full stop just outside of the entrance to pit road. The problem with this is that the entire squadron of stock cars were coming in hot right on his tail.

The routine pit stop following a caution wasn’t out of the ordinary, but having the ambulance blocking the entrance to pit road was a freak incident that ruined the rest of the race for Matt Kenseth, who got into the back of another driver as cars were trying to dart around the ambulance. Luckily, the faux pas didn’t cost him a spot in the playoffs because that would’ve been an even bigger mess for NASCAR officials.

“Whoever hits the button to open pit road needs to pay attention to what’s going on on the racetrack,” Martin Truex Jr. said after the race. “Somebody obviously wasn’t paying attention or wasn’t doing their job probably, and in my opinion at this level, it’s inexcusable.”

NASCAR’s Senior Vice President of Competition, Scott Miller, spoke about the incident to multiple reporters and revealed that the driver of the ambulance did not follow instructions.

“He didn’t stop when he was told to,” Miller explained. “We probably should [have closed pit road]. Those calls are very dynamic. They happen very, very quickly.”

Kenseth was pretty relaxed about the whole situation and didn’t get fired up over the incident, but Truex Jr. was furious about it.

What do you think about the incident? Do you agree with Martin Truex Jr.? Let us know in the comments.

Watch the full video of the incident below and Scott Miller’s statement about it.