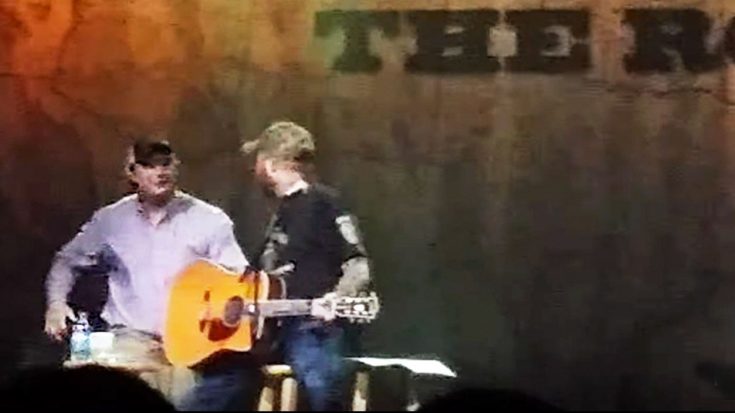 Country music singer Aaron Lewis wasn’t expecting for a “drunk frat boy”, according to Whiskey Riff, to boldly make his way on stage for one night he’s sure to never forget for all the wrong reasons.

In 2014, Lewis, a former member of the sensationally successful rock band Staind was giving a widely appreciated performance of one of the band’s former mega hits, “It’s Been A While”, when a clearly unstable man made his way onto the stage to have a moment with the singer. The moment clearly wasn’t a mutual desire, as Lewis forcefully shoved the stranger who attempted to put his arms around the country singer in what looked to be an awkward hugging attempt.

Security promptly raided the stage and removed the man while a clearly upset Lewis composed himself. Fans were irate at the unruly party crasher, as one fan is heard yelling, “F*** you, mother f*****!”

Upon gaining his composure, Lewis told his fans, “I don’t know where it said on the f****** ticket that it means you can come up on stage and hang out.” He addressed his fans with a genuine explanation for his reaction, saying,

Abbot, known as “Dimebag Darrell”, was the founder of two heavy metal bands, Pantera and Damageplan. He was shot and killed by a deranged fan in 2004 during a live performance.

Lewis gave his fans a bit of advice as he pointed to the edge of his stage,

“That f****** yellow line right there that runs along that stage; that’s your side, this is my side. You step into my side, I can’t promise you as to what the f*** is gonna happen to you, like that stupid mother f***** right there.”

The audience cheered for the singer’s cut-throat speech, acknowledging that his space had undeniably been violated.

Of course, the show must go on! Lewis continued on with his Staind ﻿tribute song and all went well! Let’s hope that “frat boy” learned his lesson!