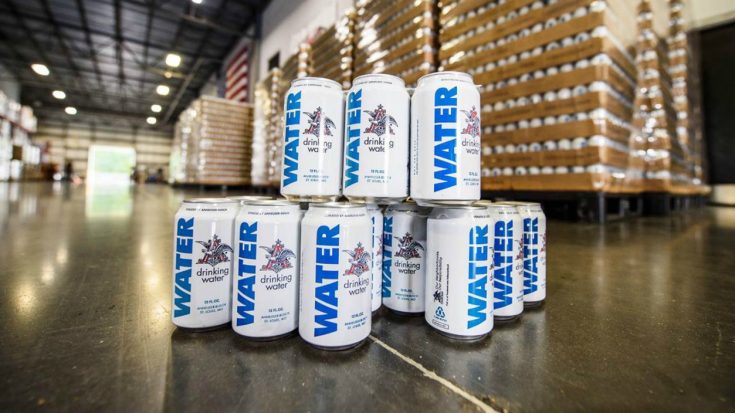 The brewers at Anheuser-Busch are no strangers to helping with disaster relief efforts, so it’s no surprise that they are once again coming to the aid of American’s affected by a natural disaster. The brewery, which produces more than 100 million barrels of beer a year, has shut down beer production at its Cartersville, Georgia, brewery in order to produce and ship cans of drinking water to victims of Hurricane Harvey.

Home to well-known beer brands such as Budweiser, Bud Light, Michelob, and Busch, the Anheuser-Busch company has already sent more than 155,000 cans of drinking water to Red Cross shelters in Baton Rouge, Louisiana, and Arlington, Texas, where it will be distributed where needed most.

“Throughout the year, we periodically pause beer production at our Cartersville, Georgia, brewery to produce emergency canned drinking water so we are ready to help out communities across the country in times of crisis. Putting our production and logistics strengths to work by providing safe, clean drinking water is the best way we can help in these situations,” Sarah Schilling, brewmaster of Anheuser-Busch’s Cartersville brewery, said in a statement.

In 2016, Anheuser-Busch shipped over 2 million cans of emergency drinking water to communities hit by natural disasters, including the California wildfires, the Louisiana floods and Hurricane Matthew.

“Since 1988 we have donated an excess of 76 million cans of clean drinking water,” Bill Bradley, Anheuser-Busch’s VP of Community Affairs, told TODAY. “The Cartersville location is our designated brewery for the emergency water program — it’s something we’re very proud of.”

Way to go, Anheuser-Busch! If you would like to join help those affected by Hurricane Harvey, click here to donate.