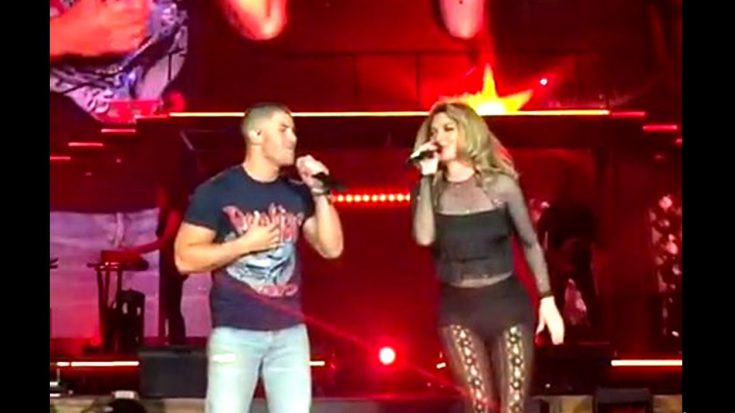 Performing at one of country music’s biggest festivals for the first time ever, country pop superstar Shania Twain pulled out all the stops for this once-in-a-lifetime experience fans had been anxiously awaiting for months!

Beyond debuting her first new music in nearly two decades, Twain also had a few extra surprises in store for the folks attending 2017’s Stagecoach festival in Indio, California. With one of the biggest setups and flashy stages around, Twain was on the right track for a top-notch night of music with her fans.

Before performing one of her signature duet hits from the early 2000s, the talented entertainer revealed that she would have a special guest joining her on stage – someone who she called “super cute”, “talented”, and “such a gentleman.”

The man joining her on stage was none other than former Disney star and Jonas Brothers member, Nick Jonas, who had previously referred to Twain as his “lifetime crush” in an interview – and the fans were all over it!

Nearly immediately after announcing who was coming out on stage to sing her 2004 duet “Party For Two,” the crowd lost it and all you can hear for a few seconds was the roaring hoot ‘n hollering from the festival-goers.

Check out this awesome surprise performance from the queen of country-pop below!