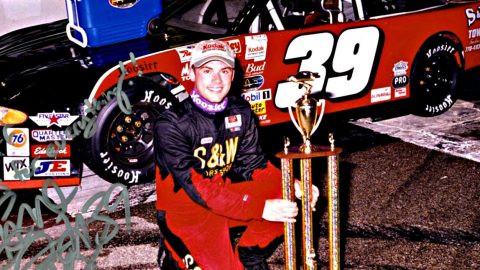 In a statement published on social media, his brother (and fellow NASCAR driver) confirmed the tragic passing of his older brother at just 34 years old.

On Twitter, current NASCAR Cup Series driver Ryan Sieg asked for prayers and thoughts to go out to his family after the unexpected passing of his brother earlier this week.

Ryan’s brother, Shane Sieg, was a former NASCAR Camping World Truck Series racer and also competed in the Busch Series for a career that lasted nearly a decade.

In his statement to followers, fans, and the NASCAR industry, Ryan Sieg shared a photo of his late brother smiling, and said, “Please keep our family in your thoughts and prayers. We lost a great driver and an incredible person. Forever in our hearts. RIP Shane.”

Please keep our family in your thoughts and prayers. We lost a great driver and an incredible person. Forever in our hearts. RIP Shane. pic.twitter.com/KAz8XSGYOu

It is unclear how Shane Sieg passed away, however his death was confirmed as early as August 19th, 2017 – just days before he would have turned 35 years old.

An outpouring of love and support flooded social media following the announcement, and many industry leaders, fellow racers, and analysts shared in the Sieg family’s grief.

This is terrible. We started racing at about the same time. I always appreciated how skilled he was.

Our thoughts and condolences go out to @RyanSiegRacing and the entire Sieg family on the loss of Shane https://t.co/MMubIrJF7D

Our thoughts and prayers are with the Sieg family during this very difficult time.

Watch the video below of one of Shane Sieg’s Truck Series races and a big crash caught on camera.