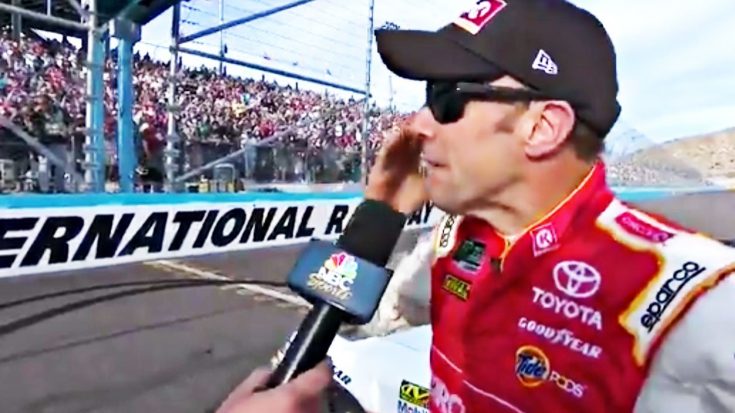 Tears streaming down his face as he stood on the track, this NASCAR driver welcomed the win with open arms and expressed his gratitude for everything that had got him there in a truly emotional moment.

Matt Kenseth recently revealed to the public that he likely wouldn’t be returning to the track after the closure of the 2017 NASCAR season and he was “stepping away” to spend more time with his family.

The 45-year-old driver took advantage of the opportunity to break away from when his contract wasn’t re-upped for the 2018 season. Left as a free agent and open for a new ride and team in the upcoming season, Kenseth made the decision to step back for an undetermined amount of time.

Matt Kenseth on spraying Joe Gibbs with champagne in victory lane: “What’s he gonna do, fire me?” Line of the year!

Following his sweeping win at Phoenix Raceway, Kenseth broke down in tears acknowledging just how impactful the moment was for him – and realizing that this was very possibly his final win in the sport.

“It’s been an amazing journey,” Kenseth gushed at the finish line. “I know I’m being a big baby right now, but I’ve got just one race left. Everybody dreams of going out a winner. We won (Sunday). Nobody can take that away from us.”

A whole lot of emotion for @mattkenseth after this win. pic.twitter.com/fF9WynFOsB

The magnitude of this win was overwhelming for Kenseth whose face was wet with tears as he continued to reel from the moment he never anticipated.

Watch Kenseth talk with Kenny Wallace about his career in the sport and reflecting on many of his biggest moments in the video below.

"Next weeks is more than likely my last race."- Matt Kenseth sits down with @Kenny_Wallace to look back on his distinguished career. pic.twitter.com/nJY2TzNTX9