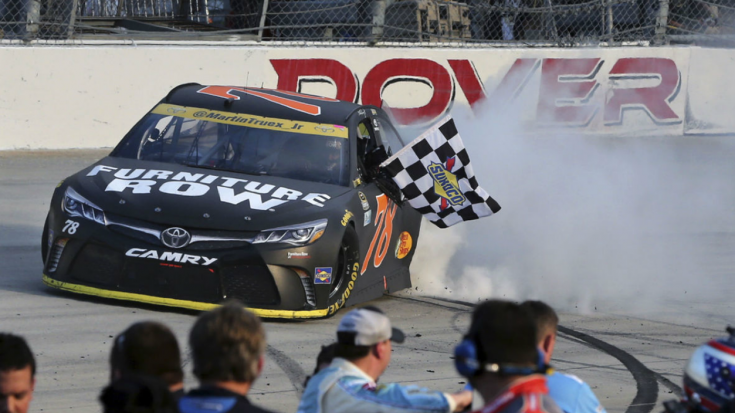 Jim Watson, one of the crew members for NASCAR driver Martin Truex Jr., died Saturday at the age of 55. A statement issued by the Furniture Row Racing team announced that Watson died of a heart attack while in town for the playoff race at Kansas Speedway.

Furniture Row Racing honored Watson by writing his name on every Goodyear racing tire used by the team in today’s race. A tribute was also posted on the helmet of Watson’s fellow crew member, Richard “Puddin” Coleman.

“Wildman,” Jim Watson’s nickname, is written in pink on every @GoodyearRacing tire to be used today on the 7️⃣7️⃣ @5hourenergy Toyota. pic.twitter.com/4gB9WdyKDs

Today is for Jim. Message to our fallen crew member on helmet of front-tire carrier Richard “Puddin” Coleman. #RIPJimWatson pic.twitter.com/I5xUVCmsL7

“On behalf of Furniture Row Racing we extend our deepest sympathies to Jim’s family,” said Joe Garone, president of Furniture Row Racing. “He was an outstanding and talented member of our racing family, whose life was dedicated to racing since his early days as a race-car driver in Wisconsin. Our thoughts and prayers go out to Jim’s wife Laurie, daughter Brittany and to his entire family and friends. Our No. 77 and 78 teams will be racing with heavy hearts today.”

Truex went on to win Sunday’s elimination race at Kansas Speedway, but did so with a heavy heart.

“We were racing for Jim today, He was a heck of a guy,” Truex said of Watson before praising the rest of his team. “I can’t say enough about all these guys. Just really proud of them, and definitely racing with a heavy heart. Jim was a great worker and put a lot of speed in these Toyotas.”

He is survived by his wife, Laurie, and daughter Brittany. Our thoughts and prayers are with Jim Watson’s family and friends.