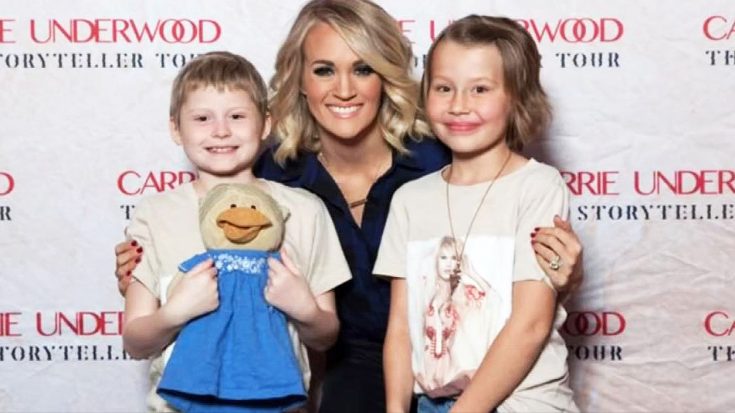 Arleigh Williams and Kodi McAlvain have a bond like no other as their inspiring friendship blossomed amidst their tough battle with cancer two years back. “I walked up to [Kodi] and said, ‘do you want to be friends?'” now 9-year-old Arleigh told Oklahoma’s News On 6. Kodi has since turned 8, admitting that she “got freaked out there for a minute” when little Arleigh lent out a hand to create what has grown as strong as their fight against cancer.

These gals share a massive love for country music, specifically singer Carrie Underwood, as they had both planned to attend her concert back in the spring for a night that had them shaking with anticipation. Unfortunately, Arleigh fell ill and was forced to miss the concert due to hospitalization. “I cried because I didn’t get to go to the concert. I was very sad,” she admitted. Kodi went, keeping her friend there in spirit and crafting a sign that read, “My best friend should be here but she’s kickin’ cancer’s butt in [Oklahoma City].”

While the sign wasn’t allowed into the concert venue, a local reporter caught wind of the craft and the girls’ story, formulating a post that was shared so rigorously that it eventually made its way to Underwood herself! Not only were the girls invited to attend an event together, but they also met the superstar singer and created memories to last a lifetime! “It was really cool!” Kodi explained.

Although the girls continue their battle against cancer, their futures are incredibly hopeful as they are anticipated to be cancer free in the future, as Kodi is expected to endure her last chemo session next week and Arleigh is hoping to finish in the spring.