By Darin Blue on February 12, 2016
Advertisement 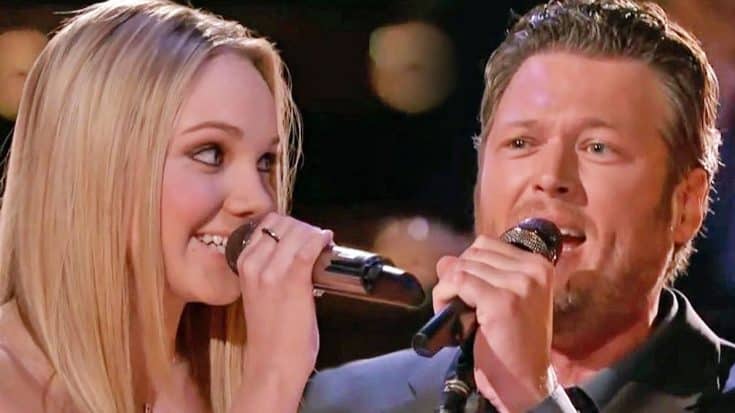 The world was first introduced to Danielle Bradbery when she stepped on to the stage of The Voice for her blind audition during Season 4 in 2013.

During the blinds, Bradbery captured the attention of three of the four coaches with her performance of Taylor Swift‘s “Mean.” As a true country girl from Texas, it was a no-brainer for Bradbery to select Blake Shelton as her coach.

Bradbery obviously made a smart choice in picking Shelton, because he managed to take her all the way to the finale. As part of the finale, the remaining contestants always perform a duet with their coach, and Bradbery and Shelton decided to perform Patty Loveless‘ “Timber, I’m Falling In Love.”

“Timber, I’m Falling In Love” was Loveless’ first number one hit, and was released in 1989 as a single off of her album Honky Tonk Angel. No one else has recored the song since then, well that is except for Bradbery and Shelton, whose cover of the song remains the most notable.

During their performance Bradbery walked out on stage first, which was set up to resemble a honky-tonk scene. While Bradbery and Shelton’s initials flashed in bright lights, Bradbery couldn’t help but smile as she glanced at her coach for the first time, who was clapping along to help cheer her on.

Shelton eventually chimed in, and the crowd went wild when he did. Him and Bradbery eventually moved away from center stage to go work the crowd, much to their delight.

The whole time they were singing, it seemed that neither Bradbery or Shelton could wipe the smiles off of their faces. You could tell they were really into their performance, which made for one of the best Voice duets between a contestant and their coach.

After you watch Bradbery and Shelton’s performance below, it should come as no surprise that Bradbery ended up winning her season of The Voice. She’s experienced a successful career since then, and is now known for her hit single “Heart of Dixie.”

The video of Bradbery and Shelton’s Voice performance is no longer online, but you can listen to the audio of their duet below.

We would love to see Bradbery and Shelton perform another duet together sometime soon!