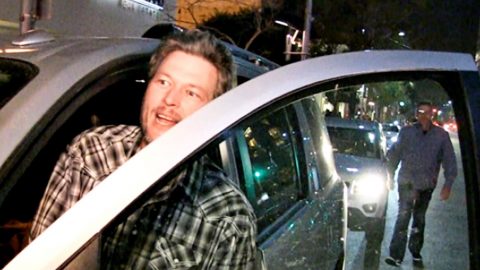 Hot off the heels of his first win in almost 200 races, this NASCAR driver received quite the gesture from one of country music’s most-famous crooners.

Taking to social media, Blake Shelton shared one of the most heartfelt well-wishes to his close friend and NASCAR driver Clint Bowyer…well, heartfelt if you’re Blake Shelton!

Shelton and Bowyer have been friends for more than a decade and each has appeared at various events to support one another during that time. Shelton even stood up for Bowyer during the infamous feud between Bowyer and Jeff Gordon.

Catching a glimpse of Bowyer in the broadcasting booth for FOX Sports NASCAR, Shelton couldn’t help but give his buddy a wave…with just one finger!

These two have their own code and sense of humor that only they really understand – but it’s clear that Blake flipping the bird at Clint is one of their inside jokes.

According to multiple fans’ comments, Bowyer had been talking up a storm about Shelton on the broadcast and that’s what inspired him to give a “friendly wave.”

Beneath the photo, the comments were rife with fans expressing their similar humor and others confused by the exchange.

Check out Blake Shelton’s full post below and let us know what you think in the comments.