Blake Shelton Hints That He May Retire Soon

By Miranda Raye on January 3, 2018
Advertisement 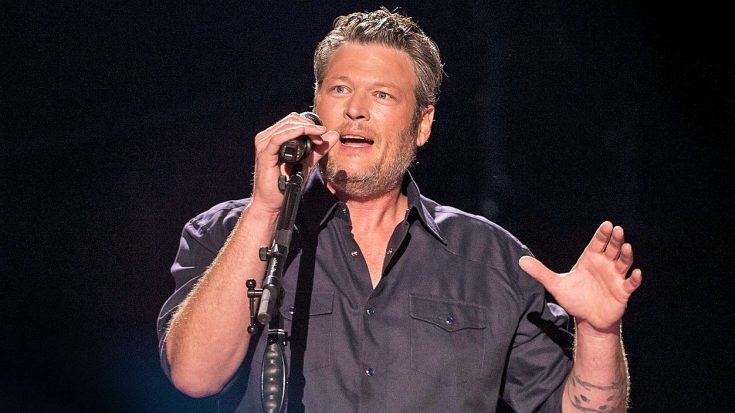 There’s no denying the fact that Blake Shelton‘s name is one of the hottest in country music, and has been for years. The past year was especially noteworthy for the superstar singer and Voice coach.

In 2017, Shelton scored another win on The Voice, earned his 25th number one hit with “I’ll Name the Dogs,” and became the most-played country artist for the entire year. As if that wasn’t enough, he opened a new music venue/restaurant in his home state of Oklahoma, established plans to open a similar venue in Nashville in 2018, and released a new album, Texoma Shore.

Shelton capped off the year by signing a new deal with his record label of 17 years, Warner Music Nashville. While specific details about the deal were not disclosed, the company’s CEO John Esposito told Billboard it was pretty much a lifetime deal.

“He re-signed with us to basically end his career here,” Esposito said. “That’s a long time.”

But Shelton recently wrote a tweet that left some fans thinking maybe that time wouldn’t be as long as Esposito thought. In fact, this particular tweet seems to tease a different kind of future for Shelton, one that doesn’t involve recording music any longer.

Before he released his 2016 album If I’m Honest, Shelton said that album would be his last. So he surprised us all when he announced his plans to release Texoma Shore toward the end of 2017.

But just as he had done before releasing If I’m Honest, Shelton said that Texoma Shore would be his last album. He spoke openly about this during an interview on the red carpet for The Voice in May, saying, “This next album I’m making is probably gonna be my last album. So I really gotta decide what I wanna do.”

However, fans had a reason to doubt his statement, since he also said it would be his last season on The Voice. He has since appeared on one additional season, and is gearing up for another.

In other words, Shelton seems to just be teasing when he says that he’s going to retire from music or quit The Voice. Still, this didn’t stop fans from freaking out when Shelton tweeted about considering retirement yet again.

The tweet in question came after Shelton watched a documentary about retiring Arizona Cardinals coach Bruce Arians. In the tweet, Shelton hinted that he may soon by joining him as a retired man.

We’ve learned from the past to take Shelton’s words about retirement with a grain of salt, so we hope he’s not being serious this time! His recent resigning with Warner Music Nashville certainly seems to disprove his claim, especially since Esposito told Billboard that Shelton “wants to continue partnership for many more albums.”

Guess only time will tell if Shelton will retire or not! After continuing to score big hits like “I’ll Name the Dogs,” we think he still has a fruitful career ahead of him!