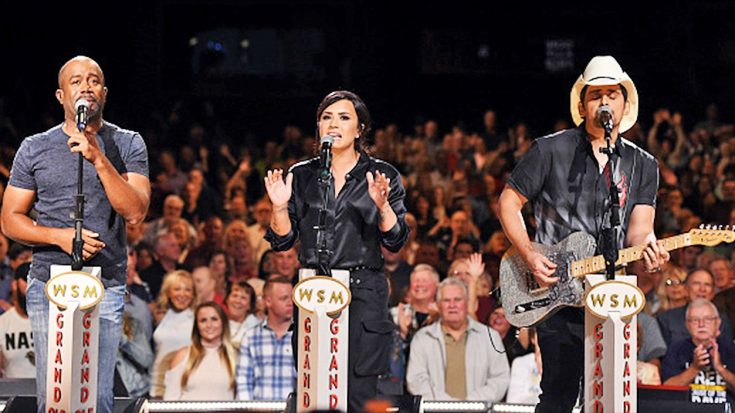 A-list celebrities came together last night (Sept. 12) to take part in the “Hand in Hand” benefit concert, a telethon aiming to raise money for those affected by Hurricanes Harvey and Irma. The hour-long televised event spanning across three cities – Nashville, New York City, and Los Angeles – has raised over $44 million for the families devastated by the natural disaster.

Country and pop came together during the event when Brad Paisley, Darius Rucker, Demi Lovato, and Cece Winans took the stage of the Grand Ole Opry for an inspiring rendition of Beatles‘ hit “With a Little Help from My Friends.” Performing the song as a quartet, the singers delivered an emotional cover of the ’60s psychedelic pop song, Paisley shredding on his Fender for an epic guitar solo.

Following their performance, Nashville sweethearts Faith Hill and Tim McGraw spoke, reminding the audience that just a few years ago the Opry was under water following a flash flood in 2010.

“Since then this city has risen in remarkable ways, so tonight we are honored to stand hand in hand with our friends all over America to help others in Texas, Florida, the Caribbean and wherever help is needed to rise up again,” said Hill.

“As Americans, let’s all keep this circle unbroken,” added McGraw.

You can watch Paisley, Rucker, and Lovato’s performance below.