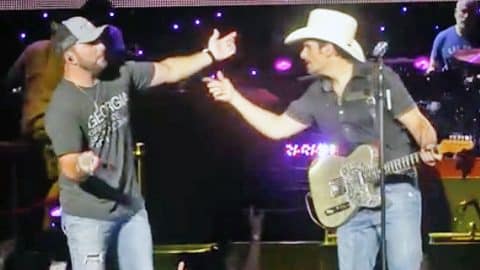 Brad Paisley is no doubt one of the biggest names in country music today and he knows it. Fellow country star Tyler Farr has been on tour with Paisley on his Life Amplified Tour ﻿and it seems Farr has fallen victim to hilarious teasing by the country superstar.

Farr posted on his Facebook “Only a couple weeks left of Brad Paisley forgetting my name on the #LifeAmplifiedTour” along with a video of Paisley jokingly forgetting his name while asking the audience to give it up for him.

The two go back in forth before Paisley miraculously remembers his concert opener’s name. Farr doesn’t appear to be the sensitive type and the two country stars hug it out at the end of the video before walking off stage together.

Paisley kicked off his 2016 world tour back in May continuing now through Oct. 1 where it wraps up in Las Vegas. Paisley was accompanied on tour by Farr as well as country duo Maddie & Tae with Chris Young stopping by on select dates.

You can watch the hilarious video below and be sure to let us know what you think in the comments!