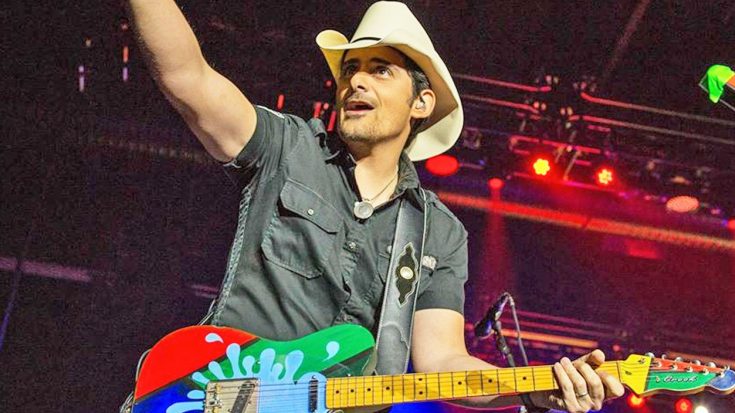 If you thought Brad Paisley was releasing a lot of music videos, you’d be correct! Normally, singers film music videos for singles that have just been dropped, but in a previously unforeseen reason, Paisley released several music videos in the last few weeks. We aren’t complaining, though! We loved each and every one.

As we found out Monday (April 24), there is a reason for this.

In a short and sweet Facebook post, Paisley revealed that his most recent album, Love and War, which was released on April 21, 2017, will be country music’s very first visual album.

Visual albums, albums where each song has a music video, have been around since the 1960s when The Beatles released A Hard Day’s Night. Over time, many artists have tried their hand at releasing visual albums, with pop and R&B music making it a huge trend in 2016.

Paisley, who served as co-writer to all 16 tracks, collaborated with Mick Jagger, John Fogerty, Bill Anderson, and rapper and producer Timbaland on the album. One of his songs, “Gold All Over The Ground” is based on a love poem Johnny Cash wrote his wife, June Carter.

While we have already seen some of his videos, including the hysterical “Last Time For Everything” and “Selfie#TheInternetIsForever“, we can’t wait to see what the entire album looks like.

The visual album for Love and War will be released to Apple Music on Friday (April 28). Watch the trailer for it below.

We are so excited to announce the first ever country music visual album available on Apple Music April 28th. Who wants to come watch it with me on Wednesday? #LoveandWar #AppleMusic